subroutine You may install and rez a piece of bioroid ice from HQ or Archives, ignoring all costs, placing it directly behind Howler. If you do, derez that piece of ice and trash Howler after the run is completed.

"Yeah. It made a loud noise, I got scared, and I jacked out. I still think I made the right decision." -g00ru
Haas-Bioroid • Lili Ibrahim • Creation and Control 16
All sets:
Links: Decklists | ANCUR 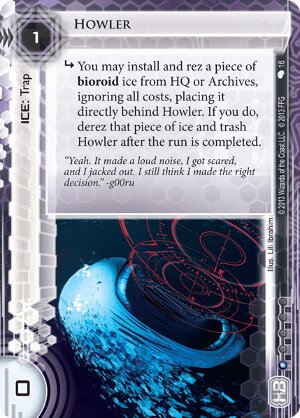 Point is made as how Howler is not effective as a trap that forces the runner to encounter ICE and suffer damage. But I feel that's the wrong way to think about this card. This is an HB trap we're talking about, not Jinteki.

This is how I plan to use this card: Say I'm trying to score an agenda while very low on credits. The runner feels confident that I can't rez anything that can keep her out so she runs the scoring server then boom surpise Wotan.

This technique is also effective in protecting centrals from a crucial Account Siphon or The Maker's Eye run.

Then there's its use for recursion and delaying the decision of where to commit the only strong ICE you currently have ("if the runner doesn't contest my scoring attempt now, i'd best have this ICE protecting R&D while I dig for the next agenda").

Howler especially shines, I think, in bioroid specialized HB identities like Stronger Together or Architects of Tomorrow.

Usualy Howler is a Trap, that's easy to avoid. If triggered, it spawns an ICE directly behind it, but that's the problem: Between Howler and the spawned ICE the Runner can simply jack out and is done with it. I tried a little Double-Trap with a Whirlpool in front of the Howler. Keep a Janus or something else with high Damage-Potential in Hand or Archive and as long as the Runner has no fitting AI-Breaker, he can't avoid it.

Unfortunatly this Trap usualy works only once and takes some Effort to set up, because the Ices need to be placed in the right order, you need to have the right Ice to load ready and it only works in a Meta where AI-Breaker are not played so often.

But it's quite fun if you're able to fire it and it got my Howler out of the Binder for a Walk. ;)

(The Universe of Tomorrow era)
haywire 66
Try it with [An Offer You Can't Refuse](/en/card/08091) and they won't even have clicks to break the Janus, and have already agreed not to jack out. — linuxmaier 6 Oct 2015
or with Port Anson for filthy jankiness — cmcadvanced 7 Oct 2015
Or put a chum in front of it. Since Howler is a trap, only AI can break it, and chum will cause damage when you rez Howler. On top of this, Howlers condition is optional, as it says "you may", so you can fire it multiple times without trashing it (if the runner can't break chum). If they can break chum, then use Howler to put in real ice. — ivanbarker 11 Oct 2015
Just came up with an, uh, interesting Howler + Twins interaction. Since Howler is only trashed after the run is completed, you can Twins it to get out multiple bioroids from archives/HQ. Yay? — enk 30 Oct 2015
Most of your criticism of this card is that it probably won't go off, but the same could be said for pretty much any trap. I also think that the possibility of using this for recursion shouldn't be discounted so much. With the possibility that R&D mill effects and ice destruction could put your best ice in the bin, having a cheap option to get it back could be useful. Like any trap, its a tool for a particular situation that you use if the opportunity arises. The fact that the runner can then jack out is also not that relevant - the point is that this card can punch above it's weight at the right time. Chum and Red Tape and both buff it (as mentioned) and it's potentially a good placeholder behind one of those. Like a lot of cheap ice it's best early game. — CascadeHush 31 Jul 2016