When the Runner encounters Lancelot, you may reveal up to 2 grail ice from HQ. For the remainder of this run, Lancelot gains the subroutines of the revealed ice in the order of your choice. 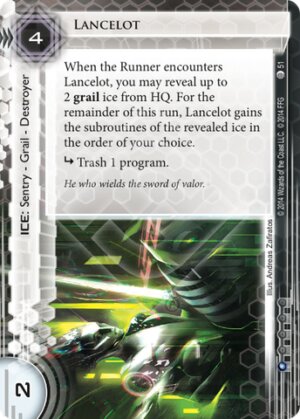 Lancelot is the least useful of the Grail Ice suite and that is saying something. If they are facechecking with a program installed it is either a Sentry breaker, Barrier breaker or something expendable. The only way you will land a hit is if they are using a barrier breaker, even then they might still get through and get a successful run.

Considering the low strength of this Sentry I think it is fair to say that in most cases it will be functionally similar to Rototurret - except Rototurret can cross the road without having another piece of Ice to hold its hand. The only advantage Lancelot has over Rototurret is that it takes an extra 2 Datasucker counters to Parasite. Lancelot is such poor card that I think even Grail decks should consider whether it is worth the influence include it.

If you do get Lancelot in hand, I suggest that you don't play it - keep it in hand to support your other grail ice, you'll get a lot more mileage out of it that way than by paying to install and rez it.

Lancelot can support or be supported by Merlin for net damage and/or Galahad for End the run. Another less likely possiblity is Excalibur which may or may not be relevant depending on which server you have located your Ice on. Often central servers get run 1st in multi-run turns, either to deactivate Jinteki: Replicating Perfection, build up Datasucker tokens, during a multiple-run Medium dig or sometimes during a Account Siphon/Vamp and then run unrezzed Ice play. Defending a scoring server with Ash 2X3ZB9CY, Caprice Nisei, Red Herrings, a Nisei MK II agenda token or even Marcus Batty becomes much more effective when it is their owly run that turn.

Grail Ice will take up a big chunk of influence in whatever deck it's played in. Decks that synergise such as The Foundry: Refining the Process or possibly NEXT Design: Guarding the Net can support grail Ice and The Foundry in particular is very synergistic since it lets you pull additional Grail Ice to your hand.

In general grail Ice is not particularly good because of the following drawbacks:

Ultimately I do not recommend using Grail Ice except for #Excalibur, which is a superb piece of Ice for many types of decks. I tried using it and it's simply too easy to break and not much of a threat once surprise is lost. Since there is no point 'splashing' Grail you will need to commit half your hand and half your influence to it - yes it can be fun to play with, but not in any deck you want to regularly win games with.

TL;DR to double the number of subroutines. Since they are both 'when' constant abilties you should be able to trigger them in the order of your choice.

Marcus Batty to try and trigger one of the gained subroutines.

(Business First era)
Zakalwe 469
However, Lancelot is the only grail that allows the Marcus Batty destroyer play where you kill their killer and then force them to face the destroyer itself. — enk 18 Mar 2016
I think you are selling Grail a little short. One advantage it has is you can deliver whichever subs onto the ICE type that is least convenient for the runner to break. Kit? don't bother with Merlin, use Lancealot and Galahad. Whiz? don't bother with Galahad, use Merlin. Of the 3, only Lancelot can be used with Batty to trash a program before the runner has a chance to break subs. — bubbathegoat 17 May 2016
Lancelot isn't going to do much installed, because runners play their killers first against most corps, and especially against jinteki. It is however great for its subroutine that it adds to the other grail pieces. I heartily recommend saving influence on Corp decks by only running this piece of ice twice. Supplement sentries with other destroyers so that they are forced to run all there types. And pack AI hate. — Severijn 14 Jul 2017