Install only in a remote server.

trash: Trash all cards installed in or protecting this server and trace [X]– if successful, do 3 net damage. X is the number of cards trashed. Use this ability only during a run on this server. 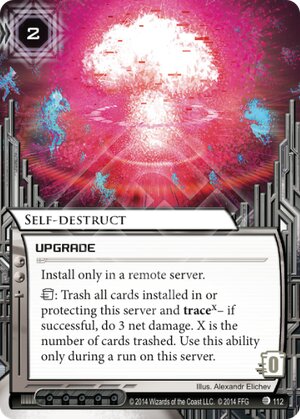 If you want trolling, install self-destruct and advanced agenda(or ronin) together. When runner pass inner most ice, trigger it! Use jackson. But I recommend you use this card with director haas or chairman hiro.

Yeah, using this with an executive seems like a good safety net. Director Haas sitting on a bomb handing out free clicks might be worth the risk of her getting trashed before installed.

If you have deep pockets to pay for both a trace and to trigger Edge of World, it also might combo well and some throw away ice.

(All That Remains era)
Scything 2
0

I'm pretty sure that this card cannot combo with Edge of World. The EoW trigger is on access , so there is no paid ability window to use Self Destruct.

If you try and use self destruct before access (which is the last time you have a chance to do it) , either the edge of world or the ice protecting the server would be gone. Therefore , edge would either proc for zero , or be trashed to the self destruct.

(All That Remains era)
Brototurret 564
what jumped to mind for me with this is to put a Checkpoint in front of it. 3 damage before deciding to access and then 3 more when I self destruct the server. whatever you're protecting just became a fatal trap. makes me want to loaf up on Mandatory Upgrades. — Hax 20 Feb 2015
Checkpoint doesn't work either. Once all ice is passed, the runner approaches the server and decides whether or not it's successful. You CAN use paid abilities before this choice is made. But once the run is successful, you cannot. So it's impossible to use a paid ability in response to a run being successful. — Bigguyforyou518 15 Mar 2015
Definitely won't work with other traps unfortunately: they trigger when accessed, this has to be triggered just before access. Runner accesses cards at 4.5 on the flowchart in the rulebook, last window to use card abilities is 4.3. Don't know about Checkpoint, but my guess is it won't work: the run is considered to be successful at step 4.4 on the flowchart, and since this would trigger at 4.3 and destroy the server and trash every card, there's no way the run can still be considered successful if the server doesn't exist anymore, right? — manveruppd 4 Apr 2015
You can combo it with Checkpoint, but only if there is a rezed Architect protecting the server. My understanding is that Checkpoint deals damage even if it gets trashed, so all you need to do is make sure the server still exists. The only way to do that is to install and rez an Architect. — RepoRogue 28 Apr 2015
Could you combo it with Thomas Hass - trash tommy for the creds you need to make the trace work and then blow the server? — joebill42 31 May 2015