Each agenda in the Runner's score area is worth 1 fewer agenda point.

If The Board is trashed while being accessed, add it to the Runner's score area as an agenda worth 2 agenda points.

No one on the board knows everyone on it.
Weyland Consortium • Maciej Rebisz • Order and Chaos 11
All sets:
Links: Decklists | ANCUR 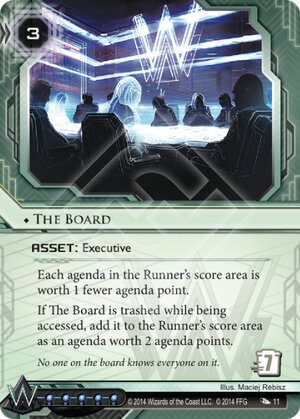 As no Corp wants the Board to be accessed by the Runner, it can be packed with a couple of cards:

Before you get all hyped about this card, you need to realize that it does ABSOLUTELY NOTHING WHATSOEVER until the runner would have 7 points if it wasn't there. That's right, this is a 2-point liability that offers zero economy, zero pressure, zero benefit to the corp whatsoever (but a large benefit to the runner if they're that one guy who still plays Iain Sterling). As an active liability with zero benefit, it's a serious contender for worst card in the entire game. If you see this as a runner, calmly ignore it entirely unless the corp leaves it exposed with no upgrade, or if you snipe it from a central and can afford the trash cost. You don't care about it at all until you're on seven points, and if you go for it early the corp will have an easier time scoring.

When the runner hits 5 points before the Board modifier, now trashing it wins them the game. The corp needs to scramble to protect this at all costs, or blow it up with Self-destruct... again, before it's actually benefited them in any way whatsoever. All of this is no doubt making it incredibly hard to score, so the corp needs to work out some kind of miracle flatline victory in the meantime. The Board does have a hefty trash cost of 7, and that's its one saving grace, but that won't actually come into play if you're forced to blow it up to save it. Forcing a runner to go through a server after this has its benefits, but those benefits are much more cheaply realized by an MCA Austerity Policy or IT Department, and those actually leave the server you paid so much into intact afterwards.

At 7 would-be points, this card becomes the whole game. The corp can no longer trash it themselves, and the runner will be going after it with everything they've got. The corp's best plan at this point is to just put all resources on guarding the Board while throwing 1-pointers behind a token amount of ice just to keep the runner from accumulating resources. I can't really see this plan resulting in success outside of the surprise Biotic Philotic play.

(System Core 2019 era)
CelestialSpark 110
The Board also offers a situational advantage against cards that can be placed in the Runner's score area AS AN AGENDA worth 0 or less points. — Him 1 Feb 2019
e.g. it annihilates Mad Dash, Notoriety, Kasi String and Freedom through Equality. It weakens Liberated Cheela. It makes Fan Site worth -1 point. It makes Shy-Kyu, News Team, Meridian and Hangeki worth -2 points. — Him 1 Feb 2019
2

Thinking about building Jinteki PE with this, Philotic Entanglement, and 1-pointers. Probably one copy of The Board with some Boot Camps to tutor it up. That leaves enough influence for some good end the run ice, but not a lot of it. Maybe a package of situational one-ofs to be able to search up with Boot Camp. Pretty much the only things I'd want to ice up are The Board, Philotic, and HQ (because of Account Siphon and Vamp). Wouldn't rez The Board until I absolutely had to, of course. Seems like a fun idea.

This card would be interesting but it's unusable because of the existence of Rumor Mill, there is nothing you can do to prevent the runner from simply winning when he has the scores he needs by popping rumor mill. It's a shame, but it requires to much building around to make it eventually working. The weakness to one very prominent card makes this unusable for tournament play.

(Martial Law era)
Lancezh 16
To be fair, it was hardly a tournament card before rumour mill — RoRo 23 Dec 2016
I could have sworn that the cards that made this unusable were mostly from the core set... and all the others were just ones that shoveled dirt on it's casket. I mean, Codebusting, a breaker suite, and Medium are enough to trash it out of R&D to shoot up two points. — Goldstep 24 Dec 2016
0

The Board has a lot of incredible potential out of faction when paired with executive boot camp, especially in Industrial Genomics. With the plethora of 1 point agendas and the ability to make archives un-runnable with multiple Shi.kyu, Shock!, and Hokusai Grid, the runner won't be able to keep up with your plans without coughing up 17+ credits, and to make things worse you just installed a Caprice / Ash to protect it. The downside to running this sort of strategy is that it is incredibly difficult and impractical for the corp to win a 35 minute tournament match by scoring 1 pointers, so you must look for a flatline victory. This is very easy for Jinkeki and between un-trash able Ronnins and Neural EMP, once the board is in play and archives is un-runnable, it is only a matter of a few turns before you have an easy flatline win.1 The Board and 3 EBC are obviously essential for this strategy, but other good includes are reuse, daily business show, and anonymous tip. Remember your strategy isn't to score or to stop the runner from scoring, only to get the board up and un-trash able, followed by a flatline as quickly as possible, you can be sure the runner will catch on and begin only clicking for creds!

(Order and Chaos era)
TechnoZ 18
3 Executives and a Board use up 8 influence already, though, so you'd have to be careful about how you spend. — lucklesslilith 3 Jul 2016