Use these credits to install ice protecting this server.

Have you tried turning it off and on again?
Neutral • Crystal Ben • Order and Chaos 26
All sets:
Links: Decklists | ANCUR 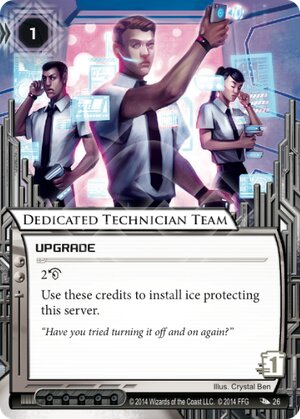 This is a pretty tough sell. Even if a magical fairy summons a copy of the card from the aether into your HQ at the moment you're ready to install it, it's still challenging to make it pay off: it costs a click to install and a credit to rez, so you're breaking even when you've gotten 3 credits out of it and starting to make a profit when you've gotten four or more credits out of it. To do that, you have to stack the ice at least four deep on the server (you can only get three credits' value at most out of the first three pieces of ice). How often are you able to afford the time and cards to stack four ice on one server? Answer: not very often.

And in the meantime, you probably don't have a magical fairy to summon the card for you, so its trash cost of 1 makes R&D and HQ more vulnerable. At least it has a nice IT Crowd reference for flavor text.

(Order and Chaos era)
Fry 42
You should probably this card away like yesterday's jam! — nickv2002 12 Feb 2015
Actually, you know, that doesn't really work, as a thing, because jam lasts for ages. — nickv2002 12 Feb 2015
I guess it's meant for blue sun, who might install ice in an outer layer a fair number of times. — joebill42 23 Mar 2015
It's nice in RP to install taxing ice on your centrals--and if it's behind an unbroken RSVP, it can't be trashed. Overall though, I agree, in most cases it's not worth it. — Pikeman 21 Sep 2015
I'll admit I just recently thought about this card when pondering about ways to turn Amazon Industrial Zone into more credits in Blue Sun - the best benefit is gotten from bumping a single piece of ice up and down, but two pieces would make Amazon more secure. Just that the install cost chips away from the profit... I don't know if it's actually worth it, but it's a nice piece of jank in that particular scenario. — Crauseon 20 Mar 2016