Test Ground can be advanced.

trash: Derez 1 card for each advancement token on Test Ground. 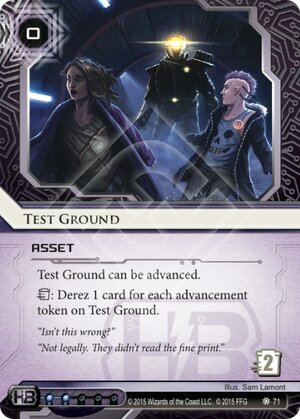 Resets EVE and Adonis campaigns or adds more money on one as the credits stay on them while derezzed. Can also be used during a run to stop ice destruction events from firing (Spooned, Forked, Knifed). Should work best as a one-off for resetting all your money makers in an asset heavy HB or glacier.

Correction: Timing structure is [paid abilities, rez, score] -> [turn starts]. So it would be impossible to fire the card twice. So the paragraph below is false. As it was mentioned in the comments, I'll leave it here.

You could also potentially use it to fire "at the start of your turn" effects multiple times. Early Early Premiere for example. Rez the card, use the effect, rez this, derez that card, rez it again.

(The Universe of Tomorrow era)
tendermovement 44
Thank you for explaining why I'd want to use this card. It wasn't immediately apparent to me and I had just glossed over this one. The best I came up with was derezzing Chimera to change its type. — bubbathegoat 27 Oct 2015
Your last paragraph is incorrect for two reasons. First, there is no paid ability window during "start of turn", so you cannot fire Test Grounds. Second, even if you could fire it to derez and re-rez (e.g.) Early Premiere, the second rez would be too late to be triggered by the "start of turn" phase. — umchoyka 27 Oct 2015
There is a paid ability window before the turn starts, but, yes, it couldn't fire twice. Rezzing, derezzing and paid abilities would happen before the turn starts so you could waste a derez on it, but it would still fire only once (Rulebook - Timing structure of turns). — tendermovement 27 Oct 2015
You could also (jank alert) derez cheap, early game Draco, so you can make it more relevant later in a game. Or Elizabeth Mills, if that's how you play. — toiry 27 Oct 2015
It'll help with the upcoming NBN identity as well, which drains runner credits when you rez advertisements. — Crauseon 27 Oct 2015
You can also derez an ICE that has been parasited, since it has no strength it won't die taking up one of the runners MU and preventing parasite reuse with clonechip or dejavu unless the runner trashes the parasite themself. — BoomFrog 11 Mar 2016
BoomFrog that's a pretty trollish move. The downside is if it was expensive ice you've got to rez it again after the runner trashes the parasite, for a net profit to the runner. — Zakalwe 9 Apr 2016
6

Test Ground can now be used to interact with the new super utility card: Advanced Assembly Lines. Rezzing Elizabeth Mills and Lily Lockwell can give useful effects. Derezzing assets and upgrades can protect them against Political Operative, but make them vulnerable to being temporarily locked down by Councilman. Derezzing ice can defend against Parasite or other ice destruction.

But this card has an unanticipated use for trolling runners. Off the Grid! Force the runner to run your deep HQ once to trash Crisium Grid and then a second time to get a successful run. When the runner has struggled through all of your HQ ice a second time, use Test Ground during step 4.3 of the run to derez Off the Grid just before the run has been declared successful! After the run ends use the ability window before the next to rez Off the Grid again (preferably using Breaker Bay Grid). Watch the runner's head explode.

As far as I can tell, Test Ground is the only card available to the Corp that allows for manual derezzing on the Corp's part. This has all sorts of useful interactions, as has been detailed in other reviews, and a few not-so-useful ones (I mean, you don't want to be rezzing your illicit ice over and over, do you?)

But the bit I'm really excited about is the interaction with the upcoming Magnet. With a little care and affection, Magnet and Test Ground together can suck up nasty parasites and miscellaneous chess bits and pieces, holding their MU hostage while completely negating their effects. It's a delicious, if somewhat unwieldy, solution to all the Parasites in my local meta.

Either way, I'll update this review once I've actually tried it. Food for thought.

(The Liberated Mind era)
Agenarchi 76
The runner can always trash a program when they go to install another one. Also once you derez Magnet you have to get the runner to run back into it in order to suck up another piece. And if it's a chess piece then as soon as Test Ground is derezzed they can just move it somewhere else. — GordonsBeard 24 Aug 2016
Maybe with Executive Boot Camp, then? — Agenarchi 2 Nov 2016