Your first click each turn must be spent to make a run or play a run event.

Once per turn, you can spend clickclick to break a subroutine on a piece of ice currently being encountered.

The Second Directive requires a bioroid to complete its primary function above all other considerations, save the First Directive.
Adam • Lili Ibrahim • Data and Destiny 41
All sets:
Links: Decklists | ANCUR 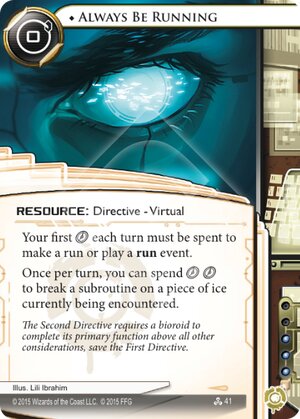 I like to think of Always Be Running as training wheels for the bike that all runners should be riding anyways. Learning how to facecheck confidently is a huge part of being an effectively aggressive runner, and one of the things that makes running so intimidating for newer players. Forcing the corp to spend money on rezzing their ice early can cripple their economy, but it often requires advanced metagame knowledge to avoid or mitigate the risks of slamming into that ice.

Adam (and this directive specifically) does something wonderful for bad runners - it picks them up and throws them in the pool. With water wings on. Too many inexperienced players gravitate to Noise, to AI breakers, or other "solitaire" auto-pilot decks that don't need to interact with the corp (or at least don't have to respond to them in any meaningful way).

The temptation is strong to turn off Always Be Running with Dr. Lovegood or delete it with Independent Thinking or Aesop's Pawnshop. But resist that urge. At worst, ABR will make you a better player, helping you to understand the corp's board state without paying (severe) consequences for it. At best, it will turn your Adam into an aggressive powerhouse, threatening one-ice servers all game long, and giving you an excellent way to pay through gigantic ice, especially in combination with e3 Feedback Implants.

Because for Adam, every ice is a Bioroid.

(Data and Destiny era)
Bigguyforyou518 1698
Nice thought. Playing with Adam since a few week, I've found that Dr. Lovegood is not that useful. Of course, it's sometimes a good emergency button, but more often than not, I'd rather to blank himself instead of a Directive. Their drawbacks are less meaningful than their powers. — Lupus Yonderboi 10 Nov 2015
Another good "training wheels" card that will teach runners how to apply early pressure is going to be Nero Severn from the Mumbad Cycle. — 4dd150n 11 Nov 2015
I have seen many Adam players blanking this card in the late game since you don't want to double click anymore and might want to get cards or credits before making a run. — Capstone 11 Nov 2015
@Capstone That's fair, although I would dispute that you don't want to double click anymore - some of the most brutal ice are only rezzed in the late game. — Bigguyforyou518 13 Nov 2015
What do Turing, Wraparound, and Swordsman have in common? Answer: Only one subroutine! Heh. — LordRandomness 2 Feb 2016
3

But on the flip side - having a paid ability, even one that costs , that can break any subroutine, is kind of bonkers. Pairing this with e3 Feedback Implants gives you a 0-install-cost, 0-memory way to get past any single piece of ice for pennies, no matter what type it is, or how strong it is.

(Data and Destiny era)
Bwob 444
It's not 0 instal cost, e3 cost 2 to instal. It's really quite cheap though. It needs to be a high impact run though to be worth all those clicks, and it's hard to keep your runs high impact when you are running every turn. — BoomFrog 16 Feb 2016
2

Always Be Running (ABR) is obviously very useful for Adam but can be extremely powerful in both Quetzal and Apex as well. Both the bird-girl and the doom-bot already use e3 Feedback Implants.

Combine these with the right breaker suite (e.g. the Deva suite for Apex) and ICE removal tools (Prey, Parasucker and the cutlery suite) the runner will be able to get into any server and keep it open too.

It's worth noting that 4 of the ICE removal tools are also run events. If you throw in Run Amok on top the corp will have a lot of trouble keeping any ICE rezzed at all.

Dirty Laundry, Early Bird and Doppelgänger offset some of ABR's disadvantages and combining these with either the successful run bonus package or the jack-out package can fix a lot of the potential economic problems ABR causes.

It's unfortunate that Jak Sinclair does not satisfy the 1st requirement so he does not combo with ABR.

Finally if we are talking about run events we certainly shouldn't leave the often ignored Ken "Express" Tenma out of the conversation. If there is any runner that wants to make one successful run each turn with a run event it's hard to look past the escaped clone. e3 Implants is a good choice for Ken anyway and paired with a suitable breaker suite (possibly including Grappling Hook?) there isn't much that can't be broken.

(Salsette Island era)
Zakalwe 470
I don't see how Jak and Always Be Running interact with each other in any way. It's not paragraph 1 on Jak. Paragraph 2a on Jak gives you a free run without using any of your standard 4 actions on it so also not that. Also not paragraph 2b because ABR is not a program. It's not paragraph 1 on ABR because Jak isn't forcing you to do something with action 1. It's not paragraph 2 on ABR either because there isn't any kind of restriction. Basically, it looks like there is zero interaction here. — Raiddinn 12 May 2016
I agree, which is why I stated that it "does not combo with ABR" in my review and provide an explanation of why he does not combo. I suppose an argument can be made that you can use ABR+e3 to break ICE on that 'free' run but I'm not sure what single ICEd server would be worth spending two clicks to get into. — Zakalwe 19 May 2016
Hilarious situation: what happens if you facecheck Excalibur with Jak, and have ABR installed? — bbbbbbbbba 27 Jun 2017
bringing back the dead a bit, but the non-interaction is that you cannot use ABR to break sub routines on your Jak runs. Because ABR says you MUST use your first click to run, you cannot use that click to break a subroutine. — Conphas 23 Sep 2017