Make a run on a server with at least 1 piece of unrezzed ice. When the run ends, gain 12credit if it was successful. 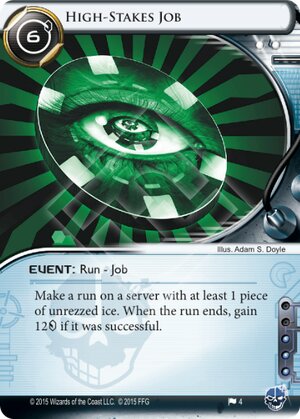 One key point about this card is that it lets you abuse corps that can't afford to rez their ICE, and Criminals are king at knowing when that's the case (and fairly strong at MAKING it the case, too). Expose is their deal, derezzing is their deal, running a central and hitting something expensive with Crescentus, then running it again with this is just salt in the wound. Similar argument goes for Emergency Shutdown.

REALLY living the Criminal dream is Account Siphon click 1, clear tags clicks 2 and 3, and this click 4 now that they're too poor to rez the ICE over whatever server you're targeting if it's anything nastier than a Pop-up Window. Corp loses 5, Runner makes a net profit of 12 and gets an access. Not bad for a day's work. And that's assuming you have no better way to get rid of the tags.

What I'm saying is that criminals have all the tools necessary to make this work with less risk than other factions. Why gamble fairly when you can rig the game? If you're already getting into servers by making it so the corp can't rez their protection, this synergizes very nicely with things you were already doing. And if you're actively DErezzing things...well, that just guarantees the corp will have a server with unrezzed ICE on it, doesn't it?

High-Stakes Job appears to be a solid criminal card on first appearance and looks like it should see some play once Kala Ghoda releases.

However once you scratch a little deeper, it will require planning to play correctly. Firstly, as a 3-inf, 6 cost Criminal run event, it is not going to see alot of splash in other decks. With Prepaid VoicePAD finding itself on the MWL list, you won't see many decks getting discounts on the cost. In addition, there will be times when you cannot play the card as the Corp will have no server with an unrezzed ice. When Dirty Laundry nets you 3 credits and can be used anytime in any deck, it seems like that extra 3 credits is not worth it.

Furthermore, a clever Corp can easily have a Jackson Howard (or a trap) waiting behind one unrezzed ice, perfect bait for you to spend 6 creds and a click.

This looks to be a Criminal Only card. Even at that, there are many Criminals that will favour more reliable burst economy. The only deck that will see alot of use for this card is one that uses three Public Terminal.

With the MWL taking some of Ken's econ (e.g. PPvP x 3 and Desperado x 2), Public Terminal x 3 and High-Stakes Job x 2 seems like a perfect replacement.

(Kala Ghoda era)
futureguy 19
You're getting a little confused with Jackson Howard. Jackson Howard prevents Dirty Laundry from being successful because, assuming Jackson Howard is naked, there are no ice or assets in the server, causing it to cease to exist and for the run to be neither successful or unsuccessful. If you're using High-Stakes Job on Jackson Howard, however, there will be at least one piece of ice in the server, and a run can be successful even if no cards can be accessed, because, for example, Jackson Howard dissappeared. — RubbishyUsername 3 Feb 2016
With 3x Public Terminal out, this would only cost 2 with Ken's ability. This card is very, VERY good for Ken - possibly also for an Andromeda Nexus build once her link is up. — GrantZilla1979 3 Feb 2016
GrantZilla1979, you are right, but there's a small little correction here. With 3 public terminals it would still COST you 3, even if you are using Ken. You get a rebate of 1 credit immediately once you play the event. So for instance, if you were running Ken with 3 terminals out, and only had 2 credits then you would not be able to play this event. However, once played, you get this 1 rebate credit and it doesn't matter if the run is successful or not. Meaning that even if you don't get the 12 credits from the event then your net spending is only 2. Kind of a nice contingency plan. — ivanbarker 9 Feb 2016
0

You can see this as a bigger version of Dirty Laundry in a sense. For Dirty Laundry you spend a click, a card and 2 credits to make a run with the upside of gaining 5 is you succeed. However, Dirty Laundry is usable against servers without ICE allowing for an archive or remote peek/trash with an upside.

The fact this requires you to run a server with unrezzed Ice snd spend 6 is a fairly big undertaking. And depending on your breaker set up and the corps willingness to rez it can be a tough sell.

It might find a place in Nazir as a way to gain a few credits but the 3 pips make it hard to justify.