Trash a rezzed asset or upgrade. If you do, gain credits equal to its trash cost. 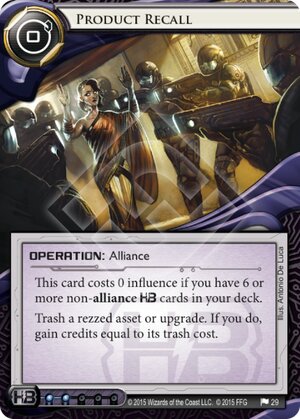 I have to comment on how freaking awesome the flavor on this card is. You are "recalling" thinking, feeling bioroids, with hopes and dreams, because they didn't live up to your expectations. Brutal. Most chilling flavor since Clone Retirement.

Anyway, the card itself. There are two ways to use this: you can either include it with cards specifically to trash them, or you can trash cards you were planning on getting rid of anyway.

The first plan is almost always a terrible idea. Even if you're trashing the in-faction Cybernetics Court, that still means you're spending two clicks and two cards for a net gain of 5. That's simply not good enough. The only card that could maybe justify it would be Sealed Vault; installing and recalling a Vault is effectively the same as playing two Hedge Funds but can be done from zero money.

What about if you happen to be playing high-trash cost cards already, which you want to get rid of? Eve Campaign is one of the obvious answers, but because you have to trash it while there are 2 still on it you're really only gaining 3. If you're playing Cerebral Imaging, Cybernetics Court is a good fallback for if you run low on money, then you can Recall it to get the same effect plus one.

But really where this is useful is in dealing with Executives: The Board, for example, or Director Haas. If they start to look unsafe you can always Recall them, putting them safely in Archives while you pick up a hefty sum from their high trash cost.