When your turn begins, you may draw 3 cards if there is no ice protecting this server. If you do, add 1 card from HQ to the bottom of R&D.

Being a Mumbad sensie star means a glamorous life, though it is lived in constant fear of blackmail-or worse-from orgcrime.
NBN • Crystal Ben • Democracy and Dogma 53
All sets:
Links: Decklists | ANCUR 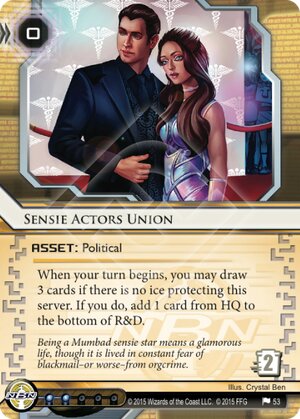 I'm going to write a real review about this card because it's fantastic and deserves it. Let's break down what this card does if you decide to fire it:

2) Pick ANY CARD from your hand and bottom it.

In and of itself this is basically a much faster, non-mandatory DBS that costs nothing to rez. It may be easier to trash, but it's still a tax for the runner. However, this becomes even more disgusting when combined with Museum of History. At the start of your turn you can choose the order that the cards fire, meaning you can do this:

2) Draw 3 cards and bottom one, guaranteeing that whatever you bottom (for example GFI will never get touched by the runner unless they force a shuffle or Show Off.

3) Net your 3 cards. Keep in mind that stuff that your excess cards can easily be shuffled back in.

This card is real.

(Democracy and Dogma era)
Chuftbot 816
so, maybe, the repeated Pharmachy sign in the background wasn't just for show — duster 10 Feb 2018
7

So, this card is now on MWL-3, which is as close to an official ban list as we can get without getting an official ban-list. It is the only Corp card put in that category, which mostly includes Anarch "No You Do Not Get To Play This Game At All" toys such as Sifr (a card so foul that the code does not want to link it properly) and Rumor Mill (or The Glacier's Melt, featuring kittens). Why? What made Sensie so powerful, no, so degenerate, that it warranted itself such fine company among Netrunner's vilest?

Full disclosure here: I am a pretty new player. So, up until very recently, I have wondered about that myself. I have wondered why do you hear that if you allow Sensie to fire more than once, you have probably lost the game. So, I went and asked and learned, and now I will pass it forward. And you, who are experienced, correct me if I am spreading disinformation.

Sensie Actor Union, as a card, was one of the keypieces of the most deranged asset spam type decks. Such decks rely on getting a "critical mass" of assets out on the field, so that the Runner can't keep up with clearing them, both economically and just click-wise. When that happens, the game is going to snowball incredibly hard in Corp's favour, baring lucky HQ or R&D agenda snipes which can allow the Runner to snatch victory out of jaws of getting suffocated by about one million assets.

Sensie helps with both, immensely. First, it will allow the Corp to power-draw into other assets it needs. Three cards is a lot, and this draw is both free (0 to rez) and doesn't really consume clicks past install. This is what Anonymous Tip wishes it would be, or would wish if it was allowed within five miles of the glory that is Sensie. Filthy prole. So yes. Power draw, power draw forever.

But wait, there is more! It does not only draw. It fixes your HQ. One of the drawbacks of drawing loads as a Corp is that you are going to draw into your agendas, and they are vulnerable when in HQ. This is especially true of light-on-ICE asset spam, which generally does not pack enough security to prevent the Runner from accessing HQ. But with Sensie, that is not a problem. Because this allows you to send an agenda - which does not even have to be one of the cards you drew with it - to the bottom of R&D where it is about as safe as it is going to get, because barring shuffles (or Showing Off, but who plays that?), the Runner is not going to see it again. So all those Vanity Projects or, hell, Global Food Initiatives are secured better than behind a glacier of ice. And so the asset spam continues unimpeded, because it has everything it needs to strangle the life (and joy) out of the poor Runner. And if the Runner insists on trashing this, well, there are always Friends in High Places. Fun times.

But perhaps most sinister is the fact that the effect is very innocent-looking. A new(ish) player such as me will lose against this card not only because they don't understand the power hidden behind (plus, being taught that Anonymous Tip, they are probably going to go "well how bad AT on a stick is going to be?" while there are scarier things out there to trash), but also will not understand how failing to trash it contributed to his painful defeat. The card is obscenely powerful and very sneaky about it. And therefore, it is good for us and the future generation of ANR players that it is almost as good as gone.

(Station One era)
Gargulec 456
You're right that the power level of the effect is bananas, and your analysis of why is spot on, but I think you're underplaying the political asset theme. They're supposed to be strong effects because they're very cheap to trash and you can't defend them with ice. Sensie is broken because 1/ It's above the curve even compared to the other political assets, 2/ It's in faction with two very strong asset spam IDs: Near Earth Hub and Controlling the Message and 3/ Political Assets are good in asset spam decks *anyway* so the one with the effect that best supports asset spam is bound to be the best, seeing as it has double synergy with the strategy. — Greasythumb 27 Apr 2017
1

Sorry if you wanted a full review solely on this card, but this cycle really feels like the sod-all-yellow-decks-cycle. Hardly a playable in faction card from all three packs so far. Until we get the new 45/17, that is.