Whenever you rez or play an out-of-faction card (including Indian Union Stock Exchange), gain 1credit. 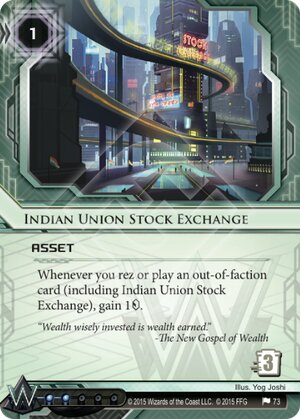 The key to using IUSE to make a whole lot of bank is knowing that Neutral cards count as out of faction.

This means that all of the most annoying Mumbad Cycle alliance assets are on the table: Museum of History, Mumba Temple and Mumbad Virtual Tour too when it comes out. All of these cards as well as Jeeves Model Bioroids, PAD Factory and Product Recall etc. can all be tutored by Mumbad City Hall.

Obviously if you are including PAD Factory you will want 3x PAD Campaign in your deck and these have just gotten better since you get paid when they get rezzed.

Mumba Temple makes all of this even better with 2 for rezzing cards.

There are lots of other useful zero/low-influence assets/upgrades as well that are found in most decks. Jackson Howard is a ubiquituous prescence in corp decks and the combination of Team Sponsorship and Turtlebacks is quite low influence too. Cyberdex Virus Suite is another common neutral card seen in many corp decks. Even high influence cards like Caprice Nisei, Marcus Batty or Ash 2X3ZB9CY can gain you 1 when they are rezzed as well.

However IUSE doesn't just apply to Assets and Upgrades, it also applies to ICE and operations.

Lets look at operations first because I want to save the best [jank combo] for last.

I think it's quite a rare corp deck that omits Hedge Fund although it's bigger brother Restructure is rarer. Now any ID can play like : BaBW getting an extra 1 with operations like these. It doesn't have to be a transaction either. Subliminal Messaging now starts earning 2-4s for zero s. I've even experimented with a BaBW rush deck that uses 3x Green Level Clearance, 3x Blue Level Clearance and 3x Jeeves Model Bioroids to really take the money to the next level.

Other great neutral or low influence operations might include: Diversified Portfolio, Fast Track, Interns, Closed Accounts, The All-Seeing I or Shipment from SanSan. With the emergence of Jeeves, Cyberdex Trial has also become more competitive with CVS.

Now ICE is one of the most exciting parts. IUSE makes gives you 1 (per copy) when you rez Neutral or other faction ICE. The traditional problem with neutral ICE is that it is often less cost efficient than in-faction options. IUSE negates that problem.

Assassin is already quite common in decks as a way to discourage face-checks and drain D4v1d. Cobra should be considered as a 'mini Assassin'. Wall of Static and Paper Wall are good gear check barriers, Enigma and Quandary play the same role for code gates.

Using the grail suite (Galahad, Lancelot, Merlin & Excalibur) is an option but it will suck up a lot of influence.

Mother Goddess is a surprisingly handy piece of ice, working well with the NEXT Suite and also great early on at stopping Account Siphon or defending a rush scoring remote.

However there is a beautiful jank combo that can be achieved using Chimera. Use Executive Boot Camp and Mumba Temple to rez Chimera for free at the start of your turn, gaining 1 for each installed IUSE. If you put it over a Surat City Grid you can also rez your other ICE, Assets & Upgrades at a discount as well. If you don't use include Surat City Grid, this combo may not even require any changes to the deck. Mumba Temple is an auto-include in Asset decks and EBC is useful both as a tutor and as a Blackmail/DDoS defence. Mother Goddess also works well with Chimera against a non-AI breaker suite.

Ultimately IUSE may prove better than Turtlebacks because it doesn't limit the player to Asset spam since it also works on ICE and Operations. Sadly IUSE does not interact with Agendas (so the dream of getting paid to score a Food must wait for another day).

(Salsette Island era)
Zakalwe 469
Good combos I had not thought of. How about this for jank, though... TMI! They either let you win the trace, or it derezzes after you make the credit, and you rez it again. — The Traveling Hero 2 May 2016
Thanks! Please like my review :-) In your suggestion of TMI the economics with 1 IUSE rezzed is that the net cost to the corp is $2 and the net cost to the runner is $2 every time it is rezzed. So in this scenario it is cost effective only if the corp can make money faster and more sustainably than the runner. Additional copies of IUSE or any runner link will change the equation of course, but I'm still not sure TMI is favourable at that rate. — Zakalwe 2 May 2016
So far my favorite thing has been getting paid for using Jackson Howard. I also enjoy turning Mumba Temple credits into real credits. — bubbathegoat 4 May 2016
It also means getting paid twice if the runner uses Councilman. Life is good. — Zakalwe 5 May 2016
This Card in any Custom Biotics decks :) — tdbarashi 14 Jun 2016