Switch your identity with another identity from the same faction. Remove Rebirth from the game instead of trashing it.

"Who were you when you realized everything you knew was a lie?"
Neutral • Hannah Christenson • The Liberated Mind 83
All sets:
Links: Decklists | ANCUR 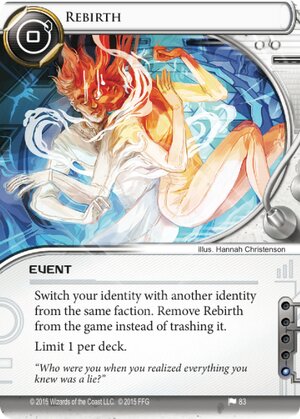 What a cool card! It is probably the most unique card in the game to date. And what interesting opportunities it presents!!! In my mind, there are two main reasons to use this card.

That being said, you may find yourself including this card under other circumstances if you happen to have a spare influence point to spend. Perhaps you can start as Nero for the early game pressure then switch to another ID once the game has progressed. Because the great thing is you can choose which ID will be best based on how the game is going. Maybe you planned on switching to Iain, but are currently crushing your opponent. In that case, maybe switch to Gabe to reimburse you for those HQ runs.

The card does have issues though. It costs an influence point, there aren't many ways to tutor it, and you can only include one in the deck. The latter two points especially present a problem. If you build a deck around it you may be left high and dry if it just happens to be sitting at the bottom of your stack. Logos is the only reliable way to get this card early that I can think of and so would be a good include if you are relying on Rebirth (it's not going to work with The Professor though :/ ).

Because of the preceding, I'm especially looking forward to using this card to switch from Andromeda to Iain. This switch would give you the first turn benefit of Andromeda with the potentially powerful ability of Iain. And you'd be stuffing 4 more influence into Iain. Oh, and you have a decent chance of drawing Rebirth early with Andromeda, or at least of getting a Logos.

So in conclusion, this card has a lot of potential and will be a lot of fun to use.

I think in any other game, Rebirth would be a fun, cute card that would let you think your way out of particular match-ups, or transition between phases of the game.

For example, Rebirthing from Kabonesa Wu into Jesminder or Kit after getting set up is a neat way to spend your influence and deck slots. And the ability to choose a different identity based on the situation offers a lot of fun decision points.

However, I think this design is a total mistake in Netrunner, for a couple reasons:

Because of these two factors, Rebirth allows Val, who has a strong abiilty that is notably blank after the start of the game, to use Omar's powerful identity ability. The player receives the upside of Val's ability and influence, with the upside of Omar's central-targeting power.

So one of the most apparent uses for this card would be to do something like start the game as Andromeda: Dispossessed Ristie to get a nine card opening hand and then turn into Gabriel Santiago: Consummate Professional or Leela Patel: Trained Pragmatist or whoever would be best in your current match up. Out of all the runners I think this works best with Andy since her ability is her opening hand. After that she's not doing anything for you.

For the other factions I think this is a harder card to want to slot in. Maybe if you're playing Kate "Mac" McCaffrey: Digital Tinker and once you have your rig all set up then you might want to rebirth into Rielle "Kit" Peddler: Transhuman for easy code gates or Jesminder Sareen: Girl Behind the Curtain for tag protection. Chaos Theory: Wünderkind could make good use of it since her best asset is the 40 card minimum meaning you can have a very tight deck and then rebirth into someone with a more useful ability, like Kate or Kit.

(The Liberated Mind era)
Jesus_Phish 22
For Anarch, I'd be most likely to rebirth from Valencia; start with the bad pub and then get to switch to someone who's suited to the matchup you're in (Whizzard if Asset Spam, Edward Kim if Operations economy, MaXX if you want powerdraws) — jdharper 27 May 2016
The Professor should make your list before Mac, as his ability is over after the deck is shuffled. — Goldstep 27 May 2016
Does the game not crash if you go from a 40 card minimum deck to a 45 card minimum deck? Anyway going from MaXx into someone like Wizzard is handy switch if you're tired of haemorraging your stack. Though MaXx players inherently don't care and just want to destroy everything including themselves. — Siaphes 27 May 2016
Deck building restrictions on the ID are only relevant during deck building, as previous rulings regarding The Professor + Cerebral Static have taught us. — The Real C 30 May 2016
2

This is stupid good in Anarch. Most of their faction Id's have been treated as plug and play for a while now, save for a tech choice or two (Excluding Noise.) Now you can start a game as Reina, Quetzal, Valencia, or even MaxX and then transition to Whizzard or Edward Kim as the game goes on. As for other factions, I think Criminal is going to be the faction where Rebirth is used most. The Professor might use this to transition to either Kit, Kate, Chaos Theory, or Nasir, but I'm not holding my breath.

(The Liberated Mind era)
Kronosdev 45
My thoughts... Reina for early taxing on rezzing, then once they are up, Whiz or Kim for trashing depending on what they are focused on... — rezwits 1 Jan 2017
0

I have a question, with Rebirth can I make a deck with The Professor: Keeper of Knowledge. Using his ability then swap him with say Kate "Mac" McCaffrey: Digital Tinker and use her. Does it matter if the deck is too small for their min deck size or the influence exceeds, the new ID's. With now owning Rebirth and seeing useful for situations like this I just want to know if this is viable or is illegal to do in the world of Netrunner.

(Martial Law era)
Dannyboy 1
Your deck has to be legal before the actual game starts. So yes, you can rebirth with the professor into any other shaper identity, withou caring about influence or deck size. Kate is always a good rebirth target, as well as Kit, and maybe even Jesminder Sareen in a NBN-matchup. — flott 18 Dec 2016
Do you think that rebirth is legal only in 46 card decks? ^^ Nope, it's fine to have illegal (lower then decksize or extrainfluence) deck during the game. Deck check is done only before the begining. — gozik 19 Dec 2016