"A new administration means we have to start greasing the wheels all over again. Let's get to work."
Weyland Consortium • Del Borovic • Fear the Masses 112
All sets:
Links: Decklists | ANCUR 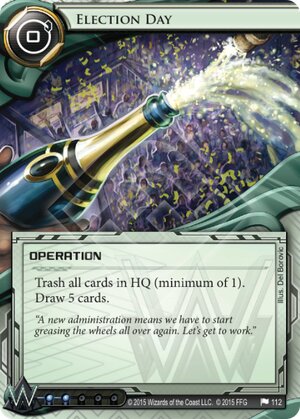 It's uncommon for me to play as Corp and think, "man, I really wish I could draw up." Usually it's when I only have 1-2 cards in hand, one of which is an agenda, and I want to pad my hand to reduce the odds of a score. Obviously I don't want to trash the agenda (barring Jackson on the table).

So when else would you use Election Day?

I don't know; it's feeling pretty niche to me. It's like a Corporate Shuffle that hurts you when you're flooded, and I haven't seen that card played much recently.

Maybe try it in a rush deck with MirrorMorphs and Clone Suffrage Movements and crap. You know, ditching all those operations you don't need right now and Suffrage them back on the turn you want them. Lemme know how it goes.

Talk about opportunities. This card creates them. Whether you are dealing with a difficult hand, or you need to quick refill your hand, I love what this card can do. I like that this is a Weyland card as it will help you reach those scorches quickly in a pinch. Just a well rounded draw card with a set back so it's not too powerful.