When your turn begins, you may move up to 3credit from your credit pool to Algo Trading.

When your turn begins, place 2credit on Algo Trading from the bank if there are at least 6credit on it. 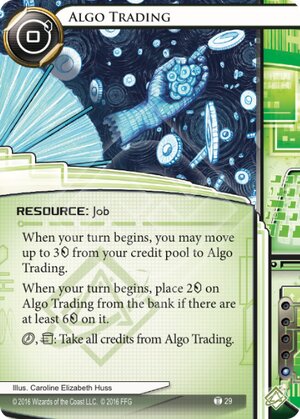 I'm sorry, @CactusJack, but this card is not better than Kati. It's substantially worse. In fact, I find this card to be unplayably bad.

But I don't think Kati is the right comparison anyway. Kati is persistent clicked economy--spaced out over several turns, sure, but ultimately you're trading clicks for credits at a more efficient rate. Algo Trading is more along the lines of Daily Casts: a card that pays off a set amount every turn, and eventually goes away.

And in that comparison, Algo Trading is simply untenably bad.

Let's look at Daily Casts in detail first to get a baseline. The turn you install it, you've spent a click and 3 for no gain. Valuing clicks and credits equally, that's a tempo hit of 4. Your next turn, you get 2 back; you're still in the hole, but only by half as much. Two turns after install, you break even. Then the following turns you go up to +2 and finally +4 before the card finished off, for a total economic value of 4.

What does Algo Trading's payout structure looks like? Well the first three turns are pretty clear. The turn you install it, you're down a click, which is a credit, so that's -1. The next turn, you have to funnel in another 3, lowering you to a -4 payout. The turn after, you do it again, putting you to -7. So far, that's pretty dang terrible--a Daily Casts would have already broken even and you're 7 credits in the red.

"Now hold on," you might say. "You aren't technically spending these credits--how is that fair?" True, you aren't spending them, per se, but any credits hosted on Algo Trading can't be spent installing icebreakers, playing other economy cards, or spent making runs. And if you get tagged, they're toast. For all intents and purposes, you're spending them, and then regaining them when (and if) you cash in.

So when do you cash in? Well, since it will take you a click to install and a click to cash in, there's no point in doing so for a 2 net gain--that's no better than clicking for credits. Waiting one more turn (to get two 2 gains) isn't much better--you could have gotten the same benefit from playing an Easy Mark and clicking for credits without all the waiting.

Even waiting three additional turns, for a 6 gain, isn't good enough-- the pattern of returns then looks like {-1,-4,-7,-7,-7,+4}. Even though it does, eventually, hit the total net return as Daily Casts, it takes an extra turn to get there, and you're going to be strapped for cash until then. That's simply not good enough.

Now, an economic value of +6 is pretty okay. But that gain is happening so fair in the future--six turns into the future, in fact, so really you're only making 1 credit a turn. I repeat, though--this isn't the same as a steady drip of one real credit a turn (like Underworld Contact or Data Folding) because you can't spend it. You're tying up your assets in a non-liquid state. And by doing so, the corp is going to either punish you for being broke, or force you to cash in too early and take a sub-optimal payout.

Maybe it could work in Nasir.Nasir is the only runner who gets value from offshoring his money, because it gives him a higher return potential when he facechecks ice. Nasir might even want to store MORE than the startup capital of 6 on Algo Trading, just so that it's cleared away when he hits ice. And then, once all the ice is rezzed, he can take it back, plus interest. But Nasir is not, has never been, and is unlikely to ever be even remotely competitive; we're throwing two bad cards together to get a mediocre outcome.

If you're truly desperate for some clickless drip, then I would recommend Zona Sul Shipping over Algo Trading in a heartbeat. The cost to set it up is so much lower, and you can use it more than once. Yeah, it dies if you're tagged, but if you think a corp wouldn't tag you and kill an Algo Trading with 14+ credits on it, then you're wrong.

(Blood Money era)
tiedyedvortex 4606
Zona also has the bonus of being reusable. On turn 7 when you get 6 creds off Zona for a net of 2 credit more than clicking for creds instead of installing and then clicking again later instead of claiming the money you've built, you don't trash the card and can wait a few more turns and get creds again. Algo is one use and dead. Only place Algo wins is in influence for Shaper players. Even then... leave them both out and Daily Casts instead. — Goldstep 20 Aug 2016
Algo MIGHT have been usable if it could take some kinds of recurring creds. Then it could have converted them up into "real" credits, and let you get value out of any you happened not to use on a different turn...alas, it quite specifically requires credits from your pool and so is, yes, pretty much only useful for Nasir. — LordRandomness 21 Aug 2016
Kati Jones is cycling out with the first cycle, so after the cycle, what card will we replace her with? — CactusJack 21 Aug 2016
I'm a strong believer that Armitage Codebusting is an undervalued card. — tiedyedvortex 23 Aug 2016
I can see Algo working really well with Vamp. — PureFlight 25 Aug 2016
The unfortunate thing here is Algo probably couldn't be a main economy card for you because in some matchups it's a dead card. It's nearly unplayable against tagging decks. The credit pool deficit from investing in Algo leaves you open to HHN. So if you're slotting an econ card that's only playable part of the time, I think you're better off using a different card. — PureFlight 25 Aug 2016
Your math is slightly off - I'm pretty sure that you get $2 from the bank on the same turn that you put the second lot of $3 on Algo Trading — Lttlefoot 28 Aug 2016
Only use for the card is with Drug Dealer. — hi_impact 1 Sep 2016
Even in Nasir, where this would be perfect Guru Davinder money, the click cost locks it away on the corps turn. — bigfleet 12 Sep 2016
Having not seen all of the cards coming out this cycle it might be too early to tell if there isn't a hidden synergy with something coming in the next three packs. Things like Beth Kilrian Chang are manipulating the amount of credits you might want to have on hand at a time. Being able to stash them without spending them could have and impact. This is also 1 influence as opposed to something like personal workshop which is much higher. I will agree that this isn't tier 1 but with the adjusted math for net gain it's +6 credits in 5 rounds, might be slightly better if there is something that needs you to be at low creds. — killj0y 14 Oct 2016
Ah found it, Financial Collapse. 0 cost operation lets the corp do tagless resource destruction or cost you 2 creds per resource. If you can keep your total artificially under 6 they can't play it, then when they can you've already trashed algo and hopefully don't need to worry about it. — killj0y 14 Oct 2016
I'm trying to think of how many times I've seen a Shaper deck carry 6+ credits in their resource pile for 2+ turns in a row. If you do that on a consistent basis, wouldn't this be a card that let's you pick up a 4-6 credit boost for something you were going to do anyway? — FightingWalloon 22 Oct 2016
2

This card is potentially better than Kati Jones. Installs for 0, and after a 6 investment (which get back when you Algo), it starts boosting itself. Yes, it's 1 less , but it's also 1 more each turn. It's a value judgement - is 1 more worth 1? I think so.

Additional thought. It has similar synergy with Armand "Geist" Walker: Tech Lord as Technical Writer and Tech Trader do. +1-3 when trashed, and +1 card, depending on the number of Tech Traders installed when ,. Also, like Technical Writer, and unlike Kati Jones, it's not unique, so you can have all 3 out simultaneously building credits.