It required a hexadecimal code along with biometrics, delivered by way of BMI.
Haas-Bioroid • Andreas Zafiratos • Quorum 111
All sets:
Links: Decklists | ANCUR 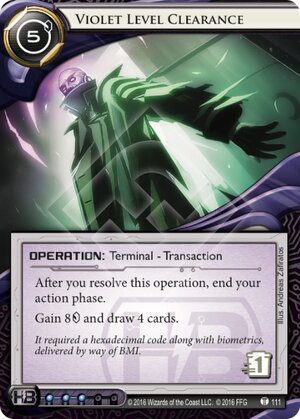 When in the game do you want to draw 4 cards at the end of you turn as corp? The short answer, you absolutely do not want to. This card is pretty much made for Cerebral Imaging: Infinite Frontiers. Outside of it, I don't very, very little use for this card, especially with it being 3 influence. With the upcoming rotation of Jackson Howard, this card will be such a detriment to use unless you use it in Cerebral Imaging: Infinite Frontiers.

(Quorum era)
Sympax 44
A card that will almost exclusively be played in faction in Cerebral Imaging. It has a trash cost, and a very low one. And it costs three influence. Meanwhile, Friends in High Places, costs only one influence, has no trash cost, and is useful everywhere. Doesn't make sense to me. — quailman2101 19 Jan 2017
This would actually be good in IG. The last thing we need though is more cards to benefit IG. — quailman2101 19 Jan 2017
Embrace the overdraw : discard cards you want to install and make a proactive use of Friends in High Place. Much click compression (yet to be tested). And if you don't want to overdraw that much, deplete your hand with Lateral Grow and Advanced Assembly Line. — Lupus Yonderboi 19 Jan 2017
Problem is that overdrawing and discarding non-Agendas will leave you Agenda flooded on average. A savvy Runner will hammer your HQ the turn after you do this. Although it might work around the midgame when HQ is too hard to hit... — LordRandomness 20 Jan 2017
This is my favourite card in my current CI deck (except the first time I test drove it and decked out). Combine with hedge and restructure to keep your credit pool/hand size healthy (and some currents to overwrite Rumor Mill) — miff 20 Feb 2017
And by Rumor Mill, I mean Employee Strike!* — miff 20 Feb 2017
0

Long time since a review of this card and this is time to have one back. This card is powerful because it draws a lot of cards and make money. 3 creds, 4 cards.

The drawback is that you're not going to do anything with those cards until your next turn and maybe it's an agenda among them!

Also that the runner is going to trash it if they sees it because, well, 1 to trash is usually auto-trash.

Usually is for combo decks or for fast decks. And sometimes glacier decks with Jinja City Grid

In todays meta you can see it in Sportsmetal: Go Big or Go Home or Asa Group: Security Through Vigilance. In kind of decks that want their pieces fast so they can pull that Game Changer or maybe it's because they have a Jinja City Grid so they can make a pretty deep server in no time.

So it's in two kind of decks. The ones that they don't mind to overdraw (because gotta go fast usually) or because they have options to prevent that of being a problem.

Cybernetics Court is a card that exist for that porpuse and make any HB feel kind of Cerebral Imaging: Infinite Frontiers

Also I've seen it with Lakshmi Smartfabrics to protect the agenda flood in the hand.

And last but not least the agenda suit that you take can help you. Maybe because it's Hyperloop Extension that gives you money even if stolen or it's Project Vacheron, that is going to be 4 turns of 0 agenda points.

So that's why in this Uprising meta you can see this in several HB decks. Maybe can be also into a Weyland deck that wants to be fast but they lack the other pieces to make it work nicely. But, hey it can give you 1 more cred if you're Weyland Consortium: Building a Better World