When the Runner passes Kakugo, do 1 net damage.

"The ultimate aim of martial arts is not having to use them." - Miyamoto Musashi
Jinteki • Adam S. Doyle • Daedalus Complex 13
All sets:
Links: Decklists | ANCUR 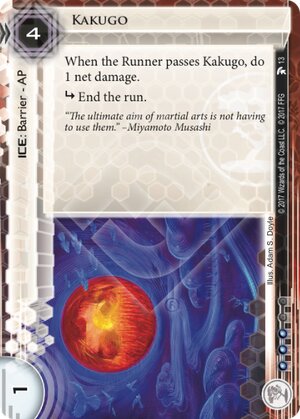 This is a pretty strong card.

The cost to rez vs cost to break is rather weak, 1 with all reasonably efficient breakers. The influence cost is high enough to ensure it sees little play outside of Jinteki. And with subtypes barrier and AP it's prone to breakage not only by fracters but by the popular Deus X as well (though having the runner trash Deus X to get through wouldn't be the worst thing).

One good thing is that at the 4 range it's still usable as gear check ice. It's a bit on the expensive side, but you have to work with what you've got and during the runner's first turn you're probably going to have 4 on hand.

But all that is immaterial. The big thing about this ice is that it's a very reliable way to make running painful. For 4 you can make the runner fear for his or her game plan. Having hand cards sniped away can derail a game plan, taking net damage can trigger a host of other nasty effects too.

Is it possible to get around Kakugo? Certainly. Your best shot would be ICE destruction and at a strength of one it isn't going to take much for Kakugo to get Knifed.

Derezzing is another option, but a fairly weak one since at 4 the corp will simply rerez it the next run (and if the corp just can't get 4 I'd say you're winning regardless of whether Kakugo is rezzed).

Bypass? I had to look that one up too. But it won't work. According to the FAQ (relevant bits at ANCUR) bypassing ICE still means passing it.

The "cannot rez" cards (DDoS, Cyber Threat, EMP Device) won't help much either as they only help for one turn and this is a card who's effect comes from being run through time after time.

And if you don't have any tricks up your sleeve? You can always bounce. I'm sure the corp won't mind that.

(Daedalus Complex era)
Silv 302
Another way to get around it can be Net Shield (at least once per turn if no other net damage is dealt) or Feedback Filter (increasing the overall cost to safely pass it without damage to 4c, making this a taxing ICE) — Krams 14 Mar 2017