subroutineTrace [4]– If successful, give the Runner 1 tag.

subroutineTrace [2]– If successful, the Runner accesses 1 fewer card whenever he or she accesses cards for the remainder of this run.

"'What does BRE stand for?' Have you seen its Net presence?" -Bernice Mai
NBN • Liiga Smilshkalne • Daedalus Complex 15
All sets:
Links: Decklists | ANCUR 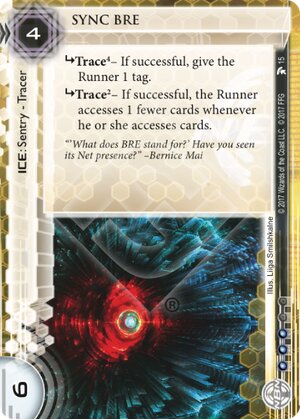 A suboptimal tracer at a reasonable cost.

The first subroutine is a decent but not great tax. Runners tend to pack a bit of link these days so let's assume 2. That means 2 to skip the tag or otherwise 2 and a click to get rid of the tag (and giving a window for things like Zealous Judge.

The second subroutine is situational. If SYNC BRE is placed in front of a scoring server with an agenda installed and the runner doesn't break subs and the scoring server has only one card installed and you have more money than the runner it lets you pay to save your agenda for one run. However unless you're facing an unprepared runner the second sub at least will be broken. The runner could also choose to let you pay to boost and just use their resource advantage later. And how often will your scoring server not have two cards in it (cough SanSan City Grid cough)?

Strength 6 is nice and could catch the runner by surprise, but these subs are unlikely to do much harm. For 3 credits more you can get Thoth which has the same subtypes and strength but is almost guaranteed to give the runner a tag. At the same cost there's Data Raven which tags the runner unless they jack out and has a really nasty subroutine on it (give the runner a tag when the corp wants to). For a stronger trace-for-tag but one that's not as guaranteed to fire (3 strength) Turnpike fits the bill and is way more economical to boot (2 and the runner loses 1 on encounter).

Would I put it in a competitive deck? No.

Would I put it in a casual deck? Nope.

Would I put it in a jank deck? Nah, not over-the-top enough.

Would I put it in a deck if my opponent and I play the deck the other assembled? Maybe. But it's perhaps a bit too strong for that.

(Addendum: The second subroutine has ambiguous wording. Per ANCUR the effect lasts until the end of the run.)

(Daedalus Complex era)
Silv 302
The wording on the 2nd sub is so weird... The way you seem to read it is with an added 'until the end of the run' and I think that's the way that makes most sense. And yeah, it does make the ICE mediocre. It's likely to fire it's weak traces that don't do much. Maybe good in tandem with Chief Slee and/or Arabyata Tech. — Krams 17 Mar 2017
Good point that the wording is ambiguous. ANCUR has a ruling on that (it's until the end of the run. Will add that into the review proper. — Silv 17 Mar 2017
On the other hand, if you can make the Runner consistently break a 6 cost Sentry you rezzed for 4 then you're coming out pretty far ahead. — LordRandomness 22 May 2017