Make a run. If you have 3 or fewer programs installed, all icebreakers have +2 strength during this run.

"The question isn't 'should I do it?' the question is 'can I do it?'" -Kabonesa Wu
Shaper • Aurore Folny • Free Mars 86
All sets:
Links: Decklists | ANCUR 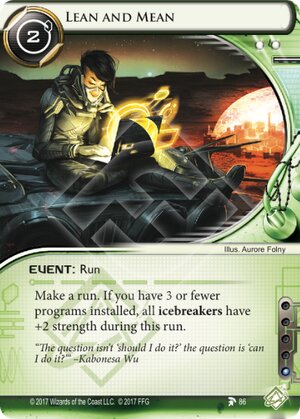 Here's a rough list of cards that make you run. You'll notice that it contains a lot of powerful cards. These are cards you cannot use in combination with Lean and Mean.

To make matters worse an icebreaker strength booster card like Lean and Mean is a tool for the runs that matter. But guess what, those are often the big multi-access runs initiated by things like The Maker's Eye or a board state altering run using cutlery like Knifed.

About the only time that you make a run that both matters enough to spend extra credits on it and isn't started by a run event or ability itself is when you run on a scoring server. And yes, in such a situation Lean and Mean can save you a few credits, potentially making the difference between win and loss.

And ok, Lean and Mean is slightly better than saving a few credits. Since it boosts ice breakers it can be used to make fixed strength breakers like Yog.0 work on heavier ice. Because it's an event that's not a trick you can pull off a lot though.

In my experience the really interesting servers have 3 pieces of ice. So 6 gross savings, 2 cost leaves 4 net savings. Certainly not bad.

Err, but wasn't there a card that gives you 4? Sure Gamble or something?

I think I'm running out of positives to say. Let's just wrap this up with my summary:

If this card had no restriction on installed programs, cost 0 and gave each breaker +4 strength I still wouldn't play it.
As Silv says, you can't play this if you're Deep Data Mining, or doing anything else interesting on the run. 99% of the time you're better off running a standard econ card.
Security Chip is 0, gives a minimum of +2 to each breaker, doesn't have the restriction and crucially can be triggered after an ice is rezzed and I STILL never play it in my Sunny decks. I don't know why FFG keep printing things like this and Pushing the Envelope and Injection Attack. They just don't do enough to justify the card slot. Maybe, MAYBE with all the difficult to boost breakers like the conspiracy breakers, Na'Not'K, etc. No, who am I kidding.

(Free Mars era)
jad 1
Security Chip is a lot better though. If your Sunny deck racks up the link a Deep Data Mining / Security Chip combo with Sunny standard breakers lets you get in for 2 credit per ice (plus 4 for DDM) to see 5 cards. That's terrifying efficiency once you have it set up. — Silv 4 Aug 2017