Choose resource, hardware or program. The Runner may trash any of his or her cards of that type, and gain 1credit for each card trashed. Gain 2credit for each installed card of the chosen type. 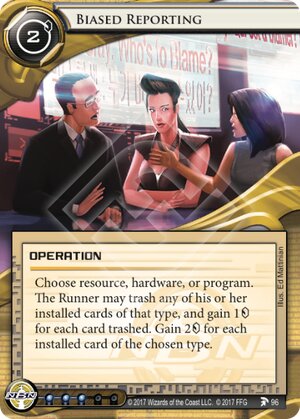 Biased Reporting is a good economy option. It only costs 2 to fire, doesn't have any extra costs like paying extra clicks and can potentially give you a lot of money.

If there are four cards left the gain is 6. That's better than IPO. The chance of pulling this off sooner or later in a game is pretty high.

(Free Mars era)
Silv 302
I think this card is more than just good, it's extremely powerful. Late game, the runner will want to at least keep theri full breaker suite + main support program (Medium or Mopus), so gaining 8c from programs should be common. But against some builds, gaining even 10 or 20 creds should be totally possible. Especially when choosing Resource. Oh, and this would be SO good turn 1 against Adam - like 6 Hedge Funds in the deck! — Krams 26 Jul 2017
Definitely powerful, but only potentially so. I think I'd only include one or two in a deck, not three. Sucks getting flooded at the beginning of a round with a great card that does nothing at the moment. — quailman2101 26 Jul 2017
In that respect it is similar to peak efficiency, diversified portfolio, and Mass commercialization. — quailman2101 26 Jul 2017
This against DLR MaxX? :D — zmb 21 Aug 2017
0

On the corp side, the economics here are pretty clear. Let's assume, for now, that the runner doesn't want to trash their stuff.

Anything above that, and this card starts to look really good, offering a significant amount of burst economy for a very low investment.

But, there are two catches. The first is that the runner has to have at least 3 cards of the same type installed for this to be worth playing, and realistically you're hoping for 4. In the late game, this is easy--most runner have at least a killer, a fracter, and a decoder, and unless they're running hardcore event econ they probably have a handful of resources as well. But this means that Biased Reporting can't fire until the late game, which is a disaster if you get it in an early hand and have to patiently wait.

The second catch is the option for the runner to trash their stuff. Now, most of the time, the runner isn't going to want to trash a card for 1. That's a pretty bad deal, especially if the cards in question are their key breakers or economy cards. But, trashing a card to gain AND deny the corp 2? Suddenly, that's a 3-credit swing, and more importantly, it keeps the corp poor. In the extreme case, the runner could clear their entire board, making this card a 2% loss for the corp instead of a gain.

This means that Biased Reporting is never going to be the card that enables a last-ditch effort. If you are sitting on 2 credits and just need a couple more to win, then unless you can bluff the runner out super hard, it's game over.

Overall, not a bad card, and against decks that go all-in on a particular type of gear (Off-Campus Apartment decks, or basically any Hayley deck) it can be an insane value. But it seems like a card you run as a 1-of or 2-of, to reduce the risk of drawing it at a bad time or in a bad matchup.