Dhegdheer can host a single program.

Lower the install cost of programs you install on Dhegdheer by 1.

The memory cost of the hosted program does not count against your memory limit. 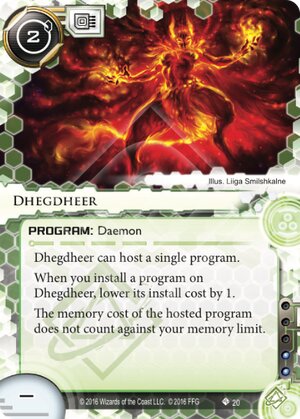 If you ever wanted to install a Hyperdriver and Endless Hunger at the same time Dhegdheer (female cannibalistic demon from Somali mythology, if you're curious) is for you.

There really isn't all that much interesting to say about Dhegdheer, it's a simple card that does exactly what it says on the tin: it saves you MU. That, of course, matters mostly with cards that either take up multiple MU (e.g. Magnum Opus) or free MU benefits you (e.g. Deep Data Mining).

When hosting a 2 MU card Dheghdeer is cheaper than two Akamatsu Mem Chips due to the discount on install. When hosting a 1 MU card the two are equally expensive. That's not bad. The mem chips are easier to install with regard to ordering however, you can install a memchip while at 4MU with 3 programs (including a Magnus Opus) installed to gain some free MU but if you want to use Dhegdheer for that same Magnus Opus you have to delay installing it until after installing Dhegdheer.

Because Dhegdheer only hosts a single program it isn't terribly vulnerable to program sniping in the way a Leprechaun with two programs is. Do watch out for Best Defense though if you have a couple of tags, although, let's face it, a sniped program is probably the least of your worries in that scenario.

Since the install cost reduction on Dhegdheer is per install you could potentially use it for a really janky Chameleon play. In Kate that lets you change the Chameleon breaker type every turn.

Like most cards Dhegdheer will not be a common card, but for decks built around the gotta-have-free-MU it's a strong candidate.

(Terminal Directive era)
Silv 302
Additional note: Hyperdriver! It costs 3 MU, so avoiding MU costs does much. It costs 1c, so it's costs are fully covered by the Dhegdheer discount. And it's temporarily, so you can use the install discount multiple times (i.e. for 3 Hyperdrivers in a row on one Dhegdheer :D) — Krams 18 May 2017
Another application of Dhegdeer is to make it easier to play Brahman. If you are going to be reinstalling that D4v1d or Lady, getting the discount a couple of times is nice bonus. And you were going to play this out of Hayley anyways, where having a program act as the additional memory is also useful for the ability of Hayley. — Severijn 3 Nov 2017