Trace [5]– If successful, do meat damage to the Runner equal to the number of printed agenda points on agendas he or she stole during his or her last turn.

"I'd say it's nothing personal, but corporations are people, too."
Weyland Consortium • Lorraine Schleter • Revised Core Set 122
All sets:
Links: Decklists | ANCUR 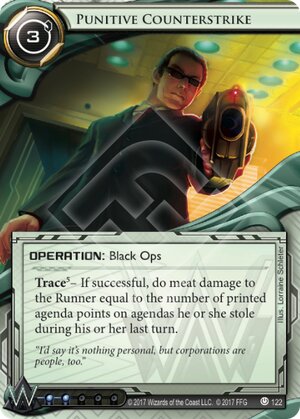 THE Scorched Earth alternative. Let's do a comparrison. For a Weyland deck to run Scorched Earth, it probably needs to include some of the following:

It can add up to a lot of cards to focus your deck around. The influence cost is pretty significant, and it can be hard to include some other tricks into your deck. This isn't to say that Scorched is a bad card, because clearly it's not. This is to highlight the wonderful alternatives that Punitive Counterstrike affords while still keeping the flatline play in your deck. To run Punitive, you need:

That's really it, although Archived Memories and some other cards are nice to help support the multiple Punitive combo. But, there you have it: Punitive Counterstrike needs itself and Agendas to work. In Weyland, it doesn't need as much influence. Outside of Weyland, it's less of a hit than Scorched. The deckspace and influence you save over the Scorched combos can be saved for other surprises.

(Order and Chaos era)
mrdudesir 626
One important note, though, is that Punitive is still a trace. A strong trace, it's true, but if the runner has money a Snare!+Scorch will kill much more reliably than Punitive. — tiedyedvortex 20 Mar 2015
I keep trying to fit Closed Accounts into my Weyland flatline decks for this purpose, but even though the Influence cost is only 1, I still can never seem to find the space. — KitsuAeryn 21 Mar 2015
Additional Pro: One of the best flavor texts in the game, imho — Clutchpedal 10 Jun 2015
Does punitive work off stealing the executives like chairman hiro? — ChairmanHiro 23 Jan 2016
metafoxx - no, it does not. Any card that says (Add to your score area) instead of (steal an agenda) does not activate Punitive Counterstrike. This applies to executives like Chairman Hiro, as well as taking agendas through Film Critic. — Bigguyforyou518 25 Jan 2016
I find that Punitive is best combo'd with Argus and Scorched. If they take the tag they open themselves up to Scorched, if they take the meat damage your punitive might be in kill range. I love it even more against multi access decks. — yourfriendmisery 2 Apr 2016