Weyland Consortium • The Devil and the Dragon 77
All sets:
Links: Decklists | ANCUR 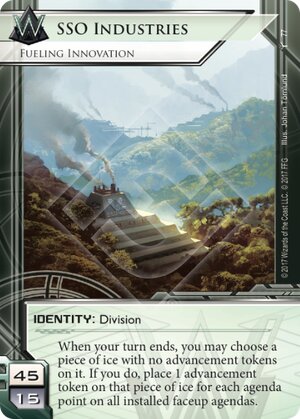 I really like this identity because of its utilization of a pre-existing mechanic: agendas that must be installed face-up. This identity introduces a new synergy with cards that may not have been played with previously due to their exposed nature.

Currently, there are five applicable agendas:

Transparency Initiative (CR) can also make other agendas function for this identity. Perhaps something to be considered with Government Takeover (CR)... that's six advancement tokens for free each round!

This identity can make advanceable ice very powerful very quickly on the cheap. If the Runner doesn't keep these agendas out of the servers, the ice can become insurmountable. Obviously, this can play well to a Glacier strategy. Some sort of fast-ish advance play could be possible, but then there's not necessarily full utilization of this identity.

While Builder (CR) and Oduduwa (CR) themselves are not advanceable, they could be well-utilized alongside these other cards. They can help continue to boost ice beyond the initial "dump" the identity can provide, since it only works on ice that don't already have advancement tokens.

To keep from running out of ice to place advancement tokens on, consider utilizing Constellation Protocol (CR), Trick of Light (CR) and Red Planet Couriers (CR).

Rules page 13: For , the Corporation installs a single agenda, asset, upgrade, or piece of ice from HQ, placing it facedown on the table.

(Kampala Ascendent era)
sanluyene 25
Also, the ID does not specify "on a piece of ice that may be advanced" turning those "<ICE> can only be advanced while rezzed" ice (e.g. Tyrant) into potential targets (a la Tennin institute). Similarly, non-advanceable ice can be targetted and used for tricks of light/ice advancement moving/ice advancement profiting mechanics (Commercialization). — HandKing 5 Jun 2018