When the Runner encounters this ice, choose a card type. For the remainder of the encounter, whenever you trash a card of that type with net damage from a subroutine on this ice, do 1 net damage. 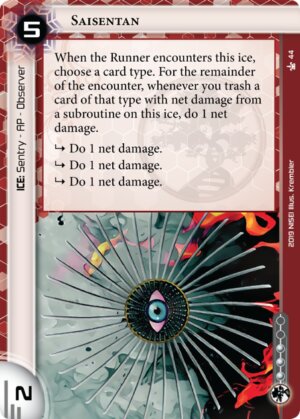 At 2 Strength for 5, Saisentan is an expensive rez, even among other Sentries. It's closest companion is Neural Katana which is 1 more strength, for 1 less to rez, though 2 fewer subroutines. And that difference in subroutines makes all the difference. If Sensei-tan didn't have it's Encounter power, then it's a question of Strength cost vs Break cost

Some notable examples include:

Mimic breaks Katana for 1, vs 3 for Sai-sentence.

GS Shrike M2 breaks both for 4.

Ika breaks Katana for 3 vs 2 for Caeser-Ten; assuming already hosting.

Shiv actually has an easier time with Sailly-senten, requiring only a couple fellow breakers, or even fewer with a bit of boosting to crack all three subs.

The summary is that the credit tax to the runner is roughly the same, favoring Sentai-san only where breaking is more taxing than boosting, typically with static breakers; though I'll leave an in-depth comparison as an exercise for the reader...

But there's a wrinkle in all this I mentioned earlier. Thaisentan isn't actually JUST 3 Net damage. If allowed to fully fire, this card will land up to 6 Net damage. SIX. Realistically, it'll probably only land 4. Only.

Which brings me around to my initial two words. If you can pay for the rez cost, this cards puts an unprepared runner to well within flat-line range. In-Faction, this is a dangerous little Sentry, with a premium price to pay for it's premium package, and at three influence, it's probably not going to see use outside Jinteki, though a few of you will probably prove me wrong.

All this being said, is it worth the slot? From me, it gets a firm Maybe. It's ability and subroutines make it physically painful to move through, and while it's always going to be cheaper for the Runner to crack than for the Corp to rez, it makes an excellent face-blender in the early game. If you can afford the cost early enough to make it worth it, much like another high-rez-to-low-strength Sentry... Well, you're probably not looking to win by scoring.

Great review. I'd love a comparison to Cortex Lock, which is a lot more relevant for today's meta, but this review highlights Saisentan's pros/cons really well.

Imagine this thing with Prāna Condenser...

World's Worst Brain Freeze is another comparable piece of ICE. On it's own, C-Lock is probably one of the best pieces of thorny ICE. At 4 Str with only a 2<span class="icon icon-credit"></span> Rez cost, it's an absolute steal, and significantly cheaper to Rez, and much harder to Break than Saisentan. Interestingly, these two pieces of ICE do almost the same thing, or at least, operate on the same level. Both are ICE you want to rez early enough to be useful, both have the potential to do a lot of Net damage; and as a result of these two things, they occupy the same sort of game space. Only Cortex Lock is infinitely more forgiving on the Corp's bank. So when is Cortex Lock more useful than Saisentan? When the Corp's poor. Thanks for coming- What? You need more? Fine. Cortex Lock is useful really only once. It hurts a little less than Saisentan when you stick your face against it, and afterwards the runner gets to decide how dangerous C-Lock is. More programs = less Memory = Less damage; Runners can equip themselves accordingly, with the potential of just walking through entirely. However, a runner will always need to address the damage done by Saisentan, and as such, will either always choose to break, or try and bypass it. Break-cost of Cortex vs Sai is comparable to my earlier comparison, only now swung much more heavily in Cortex's favor, both due to the higher strength, and it's low rez cost. TL;DR: Saisentan is a feisty little Sentry loaded for bear, but wants you to pay for the cost of all it's ammo. It's something a Runner will need to take measures to address.