Dance of the Long-Legged Swamp Bird

With so many fun Kit cards released recently, I wanted to make my own spin on one of my favorite Netrunner decks: Waverider Kit. I'm admittedly a kitchen table player, so take it as you will. 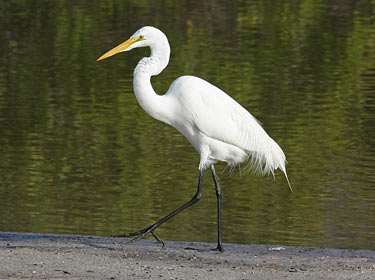 Two programs with a total cost of 11 credits constitute the core of your rig: Magnum Opus and Inversificator. I've included Modded to hopefully help offset the early game burden, as well as cheat out the more expensive hardware later on. As the only economy engine, an early Opus is critical. The ideal opening hand would be to have an Opus with a Modded, but even just a single SMC is probably worth keeping.

The upside to using Inversificator, Egret, and even Tinkering means you are no longer confined to a single run each turn. I've avoided the stealth credit approach to encourage this more, and Opus also helps to combat any assets that are polluting our wetlands.

The neat interaction with Kit and Inversificator is that after breaking the first piece of ice in a server, you can swap it with the ice behind it. Kit's ability makes that ice remain a code gate until the run ends, so after encountering it again and breaking all of the subs one more time, you've just passed two pieces of unknown ice with one breaker! With a Tinkering in hand, or a way to install an Egret mid-run, three ice on a server isn't an issue either.

If a beefy piece of ice is unfortunately installed in the outermost position, our first Inversificator trick can fall right out of the sky due to the cost of breaking an Archer or Tollbooth twice. But Inversificator is also great for moving that taxing ice to whatever server is less important at the moment. Ideally, you'll never have to break it again as you continually shift ice around. Dedicated Processor is intended to help tackle any larger ice and shore up our otherwise adequate breaker.

Although Surfer isn't strictly necessary sometimes, if any server starts to approach glacial status, install an Egret on the outermost piece of ice. After surfing your way into the server, you can use Inversificator to move the same ice back on the outside to prep for a future run. Remember, Egrets are warm weather birds and prefer to be on the outside of large stacks of ice, rather than underneath them.

After a successfully server surf, you also have the option to pivot the Egret-inhabited or Tinkered ice to the outside of another server entirely. Being able to make several surfing runs in a single turn can be a lot of fun, and weaving through a field of constantly shifting ice is pretty unique to my Netrunner experience so far. But remember that the Inversificator swap can only happen once per turn, so this does require some planning.

A singleton of Escher is still too hard for me to pass up in a Kit deck, as it helps to lock down remotes, hammer RnD, or enable the great Egret migration.

The Corp can choose to trash the ice hosting an Egret while installing a new piece of ice, which can present a bit of a problem. I'm usually okay with this trade but if things get too out of hand, Levy AR Lab Access is there to replenish your bird reserves. Clone Chip is also intended to help in this regard.

Weyland presents probably the most unfavorable matchups with both Blue Sun and Skorpios. Returning rezzed ice to hand with Blue Sun is a good way to shake off any lodged Egrets, and Skorpios ensures that downed birds never return home. Blue Sun is also well-suited to having some counter play available for our ice positioning tricks. If either of these IDs are prevalent in your local meta, squeezing in an Employee Strike or two is recommended. Sacrificial Construct doesn't help with cards trashed while hosted, so it might also be worth slotting a Paintbrush as a last resort if you have to go entirely birdless. See Waverider Kit for more details on the Paintbrush style.

The Gauntlet gives the deck some HQ pressure, much needed memory, and most importantly: additional bird theme! Although Inversificator does let you get through up to two pieces of ice on its own, the interaction with The Gauntlet isn't always ideal. Although you've potentially passed two pieces of ice protecting HQ, you would have only broken all subs on one which results in just a single extra access. However, Inversificator and Egret can help stack code gates for additional accesses if that's the central in need of more focus.

Plascrete Carapace and Interdiction can be swapped out for whatever cards better suit your meta. Perhaps Misdirection or Feedback Filter.