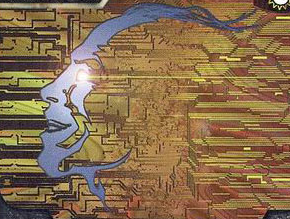 Deck uses Derez effects, Los' ability to make money off of rezzes, and En Passant as a punishment for not rezzing to help clear the board. Keros gives you bucks for derezzes. The Rubicon Switch is pretty fun, just testing it out. Memory Units aren't really ever an issue since at the core it's just Abagnale NanotK and Paperclip. Tapwrm can be decent economy, but just getting the corp to spend a turn purging can be great for tempo while setting up. A lone Sneakdoor Beta sits here in case the runner decides to leave Archives blank.

Forged Activation Orders can trash ICE or force the corp to agree to give you some cash, Rubicon can be used right away and can potentially chain profit or no cost off of Keros.

I'm not really impressed with any of the criminal consoles for this deck, so Maui is there as a potential Econ option - but really this can be swapped out for like anything. Before coming to my senses the two influence I used on Scrubbers was put into an Astrolabe for tempo/low costs.

Posting mainly for discussion, I've been brewing this today and it seems to be doing decently online, still tweaking things around, considering going up another Bank Job or maybe some Dirty Laundries. Core deck concept has roughly a 70% win rate but that number is skewed, this version has been winning better than the previous shells.