Who or What is HHN? (Undefeated* Pandemonium GNK) 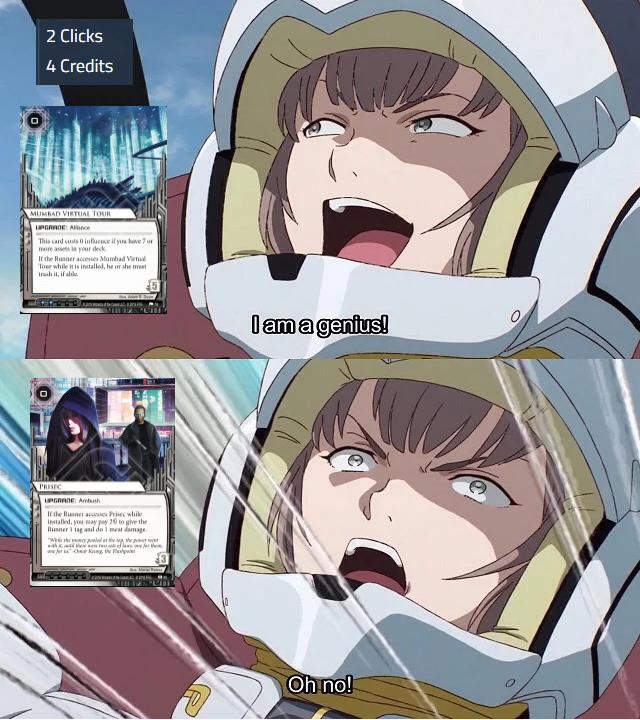 This is an homage to my favorite deck of all time, Who or What is Hedge Fund?

It's the deck that first got me hooked on playing Corp, and that's a dragon I've been chasing ever since. This deck doesn't even come remotely close to the same feeling (meta is so, so much different), but it's still tons of fun.

This deck plays a lot like standard ARES CtM - keep putting stuff down and try to get the FA train rolling with Cali Testings and Team Spons, reinstalling either money cards like Rashers and Bankers or the Cali Testings if they're too poor to contest.

There are a few big differences between this and other Canonically Correct CtMs:

This is probably a mistake. It's intentional to bring the deck more in line with the playstyle of Who or What, but HHN is probably too good of a card to pass up. It's much more useful against weaker runners, strong runners will plan for it and minimize its effect.

It's worth talking about Sea Source here. The way that I mostly won games with Who or What was mostly trying to score in a hell remote with Red Herrings and other nastiness. If they run, lots of times they're too broke to steal. If they have enough to steal, it puts them in SEA/EoI range the following turn.

This deck skips the Herrings (slots are hard and the ice here doesn't synergize with that plan) in order to just SEA --> EoI them after they go broke contesting your board. Feeding them food at the right time is crucial for that plan, since that's your EoI target.

And nothing, NOTHING feels as good in Netrunner to me than a turn of SEA --> EoI --> Closed/All Seeing I.

Another note here - this deck needs Psychographics. It's too good of a win con not to play when the runner goes tag-me. I thought I could cut it after cutting HHN but it belongs. Slots are hard.

This seve- I mean 9/10 card feels so good in CtM - and I'm sure that this deck doesn't take full advantage of it. It acts as 3 more copies of Bankers that you can actually protect with ice.

Throw it behind literally any ice in the deck and it becomes a huge tempo hit to trash - especially if you have an ARES scored.

I think that means the ice suite is wrong, and that with tweaks this deck could be much, much better. Someone smarter than me will do it and I'll copy them.

It feels so good to have runners dip down in credits before accessing to avoid MVT and hitting them with that sweet sweet meat&tag. It's a huge tempo hit that often means they can't afford to trash the Prisec.

Of course, you do have to pay 2c for the privilege of shooting them in the face, and in games where econ is tight that 2c means a lot. But this is the card that makes this deck feel most like Who or What to me, and so I slot it 3x.

This is just flat out good ice. I'm not sure if it's 3x, and the deck definitely is crying out for more ETR ice, so there is a lot of room for improvement here. But it fits really well with the gameplan and sometimes makes you money, and the Spicer Alt for this card is :fireemoji: :fireemoji: :fireemoji:, so 3x it is.

Always save your Preemptive to get back EoI and other tag punishment. Team Spons are your tool to recur assets.

You can watch the deck in action here in a knock-down drag-out game that was an absolute blast to play.

Thanks so much to Jamie for running all the events and for the :Panda: crew for keeping turnout strong. Always say trace 4.