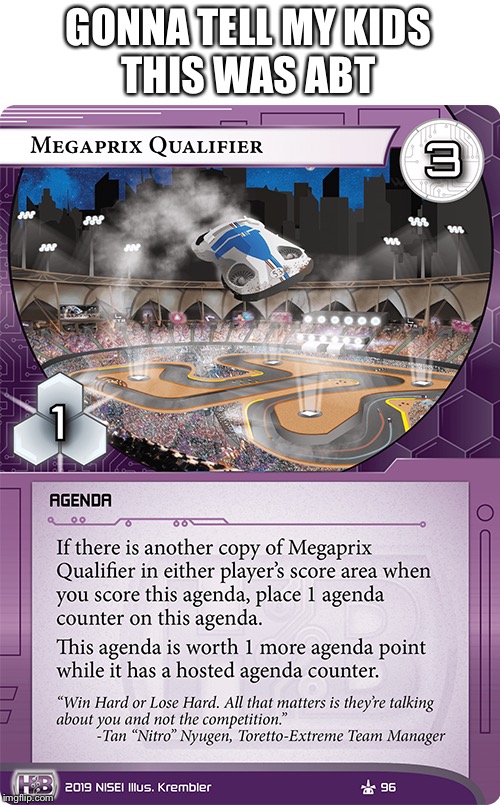 This deck, that went 3-2 in swiss, was one of the only not-combo SM in the Italian National 2019. The 2 losses were a timed loss (1- 2) and a “flooded” loss against 2 adams. The plan is simple. Rush if you can, turn to glacier if you must. Finally close with a biotic. If all according to plan, you have to score 3 agendas (if the Global is in it), they have to score 4, worst case 5 agendas (being the Megaprix Qualifier a 3/1 for them). Nothing wrong scoring 4 tho, is the Megaprix is scored by you first.

Round 2: Win vs Smoke - I was not able to full rush against Smoke, my opponent was in control for the good part of the match. I scored the CST early and stayed on the back foot for all the game. I sneaked a Project Vitruvius and we were 4 - 4 I tried the Fast advance path but i was clotted and the agenda stolen: 4-6 Then with a GFI and the second Biotic in hand I installed-advance-credit in the 6 ice but only 3 rezzed remote. The smoke player thought was another 4/2 and/or a NGO and didn’t ran there. Biotic for 4 advancement for the win.

Round 3: lost vs Adam - The previous match was 55 minute long. Last turn he ran and stole a 3/2. I scored only a 3/1 and that was it. Is the agenda stolen was another megaprix and mine was worth 2 point I wold have won that

Round 4: lost vs Adam - 5 agendas in the first 10 card, protecting hq with an ip block. 4 double access were enough to steal 8 points

Round 5: vs Val - Surviving the first Apocalypse with the ever present Architect on RnD, I was quick enough to rebuild my scoring/rushing server avoiding steals from single accesses to RnD