A bug in your Nats deck? More likely than you think! 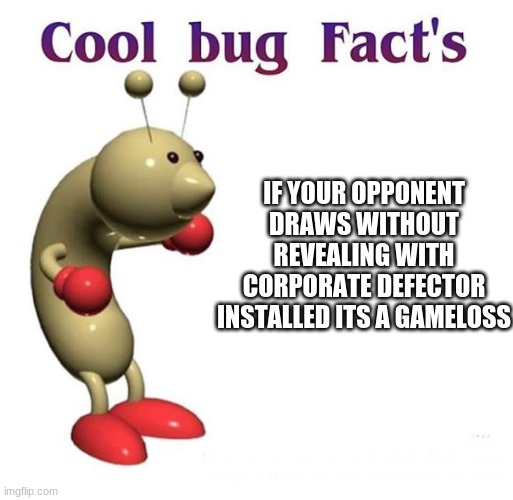 This deck is guaranteed to make your opponent stop what they're doing and ask "What does that card do?" and "Are you sure that hasn't rotated?" and "What do you mean that's a gameloss?"

The titular Omnijeff piloted this spike slaying pile of jank to the cut at 2018 Nationals only dropping 2 games (due to not knowing about the second of this decks TWO unbeatable strategies).

This deck has two UNBEATABLE strategies: First up this deck uses the BROKEN combo of ZERO and CLAN VENGEANCE to its MAXIMUM POTENTIAL!

You have extra self damaging cards (Mad Dash, Stimhack) to guaranteed the MAX value as soon as possible. Titanium Ribs prevents any valuable POWERHOUSE self damage cards from being trashed (and turns I've had Worse into a draw 5).

Then, once you've setup the Vengance you install bug and defector and get the BUGFECTOR lock going! You see every card your opponent draws, THROWING any agenda you see into the trash and allowing you to MAD DASH to VICTORY.

Levy allows you a massive SIX Clan Veangances! The PURE POWER of this has warped the meta so far the cowardly FFG was forced to ban Mad Dash and Zero. Unbeatable!

Second up is a little strategy I like to call The Prestige! Step 1, The Pledge: You install Corporate Defector acting like this is a normal card people know.

Step 2, The Turn: You wait for your opponent to make an ordinary click for draw action and put the card into their handle, shuffling it around and obscuring which one it was. At this point, your magic has been sprung!

Step 3, The Prestige: You call a judge, revealing that your opponent has in fact created an irreparable game state necessitating a game loss under FFG floor rules (have floor rules on hand and a tweet from Lucas printed out in case the judge is not on top of the game). The game is won, the audience is stunned having no idea one simple Netrunner card nobody played is so powerful.

You may notice I have promised this deck is unbeatable and Omnijeff did not win. This is only because he did not about the power of the MIGHTY prestige and played this as a one trick deck which allowed him to be defeated in the cut by Political Dealings (THE ONLY COUNTER). If one has a time machine they have a GUARANTEED first place finish at 2018 US Nationals.