You had your shot, and you blew it.
NBN • Hannah Christenson • Data and Destiny 4
All sets:
Links: Decklists | ANCUR 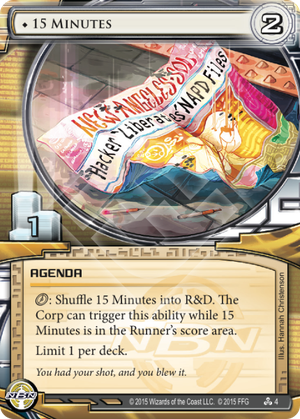 NBN has million way to give tag to runner. You let them have their agenda. Score 15 Minute and Exchange It with 2-3 Pointer they steal. Take back 15 Minute.

Now you leave runner with no score.

The Con is if you claim back your AstroScript Pilot Program It's not score so your astrotrain is stop.

(Salsette Island era)
ThoraninC 13
Although if the runner used Turntable to steal your Astro or Sales Team then you can get it back with Exchange of Information. — Zakalwe 22 May 2016
2

I really like the idea of abusing this card with team sponsorship in NBN, using fast track to search it out again and again, as well as Jackson, while triggering your turtlebacks with team sponsorship. No one uses it in this manner, but the card doesn't say you can't use it while it's in your own score area.

Alone, the card gives NBN 4 2/1 agendas, which is enough of a reason to like the card, if you're not into waiting until the runner has his rug together to win. Or you just like winning in general.

(Data and Destiny era)
cmcadvanced 25
Actually, does specify where you can use the shuffle ability. The reason no one uses it in this manner is because you can't. — Marit Lage 14 Nov 2015
No, it specifies a generally-not-allowable method of triggering. Agendas are active within the corp's scoring area, and the card does not state anything to the contrary. I imagine it'll be added to the FAQ soon, but until then my opinion is that it can be used in the corp's scoring area, just like any other agenda the corp has scored. — driph 16 Nov 2015
(and after hearing back from FFG, yes, 15 Minutes can be fired off from the corp's score area) — driph 18 Nov 2015