Whenever you use a trash ability, draw 1 card.

"Everything has a price."
Criminal • Matt Zeilinger • The Underway 63
All sets:
Links: Decklists | ANCUR 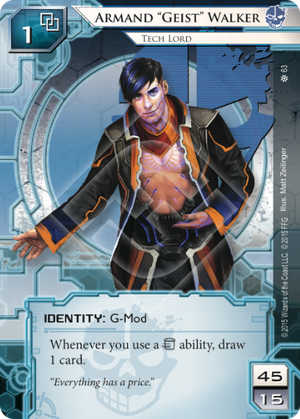 If you're going heavy on trashable programs, you will probably want to run EITHER three Self-modifying Code OR three Clone Chip, depending on what sort of Geist deck you're building. Thanks to NAPD Most Wanted Clone Chip now has an effective influence cost of 3, meaning this becomes a very either-or type decision (although a mix of the two is possible, and running less than three may be necessary if other Influence options prove to be powerful). Both cards produce the powerful effect of "trash this card, draw 1, fetch a trashable Program I need right now, trash THAT card, draw another 1" which tacks "draw 2" onto the classic strategy Shapers have been using since Creation and Control. The point is that these two cards are very strong if you have any number of trashable programs, and should always be considered if not used.

The decision on which to use is tricky. Clone Chip is best if you anticipate needing your trashable programs many times each (the big one here is one-shot Criminal icebreakers like Shiv), while SMC functions better if you expect to need a very specific program in a very specific scenario (good for "silver bullets" like Deus X). Essentially it's a question of doing the same thing every game but with reliability and repeatability, or being more versatile and able to respond to disparate threats but less able to do it again. The former will work better for slow Geist decks that want to build a game plan resilient enough to stand up to corp punishment, while the latter works better for a fast build that aims to turn the ability to frustrate everything the corp does early on into a quick win.

So while we're on the subject, what general plans can the program-focused Geist deck execute on?

This build wants Clone Chip for recurring icebreakers, and a small number of standard breakers so you're not trashing Spike to get through Paper Wall. Ambitious Runners can try to minimize the standard breaker usage by picking up an AI breaker, Grappling Hook, and/or e3 Feedback Implants instead (Overmind pairs nicely with Cloud breakers that consume no MU and is useful with Hook and Implants so that it only has to expend one counter, while Crypsis is handy by itself for those times when you just absolutely need to break that one thing). Special Order is a worthwhile Event, fetching the Cloud breaker you need or just fetching it to power up your other Cloud breakers for the run at hand.

You'll want to reliably hit all your rig pieces, and hit them often. Fortunately, Geist has access to a number of deck thinning options that no other Runner can make use of! Cortez Chip and Fall Guy represent two credit swings for only the click spent to play them, with some added side functionality as a bonus. Muertos Gang Member draws TWO cards for Geist, so while it's not quite Diesel if you think you can get decent use out of the effect it's very worthwhile. I suggest using it while the corp has nothing out but rezzed ICE and then running whichever server they derez an ICE on. If they re-rez it you can claim your two cards and a credit swing equal to the ICE's rez cost, if they don't then you've bypassed it! Muertos is usually very situational, but in Geist's hands the worst case is pretty much "draw two cards" which isn't ideal but is far from being a dead card. Technical Writer is great econ if you're going to be installing a huge number of Cloud breakers. Of course one COULD always thin their deck by simply clicking for cards, but if you can find the deck space these minor benefits on top of your card-click can be well worth the cost of the deck slot (and at 0 creds to play and self-replacing, that's the only cost you're going to be paying!)

Finally there's the matter of econ. This will probably be to personal taste, although as mentioned above Fall Guy is worth a couple creds in exchange for nothing more than the deckslot you put him in. Gorman Drip v1 is stronger with Geist but still not the greatest, so perhaps a traditional economy base is the way to go.

Even though they won't trigger Geist's ability, you probably also want to run a few things like Faerie that can help force you through in the midgame temporarily. The idea of this deck is to use Geist's ability to delay running out of tempo while you burn through temporary but powerful tools to score seven Agenda points before the corp can react with more than a few token objections that are easily put down by your one-off defenses. SMC can fetch the programs you need to make this happen, or sit on the field threatening to fish out a silver bullet answer to whatever problem the corp is throwing your way. Geist pulls off the toolbox rush archetype well due to the number of trash cards in it, even though most of his influence ends up going on some handy Shaper cards as a result. Consider some quick multi-access cards as well to further speed up the game plan.

One final thing I'd like to point out is the possibility of going heavy on Hardware and Resources instead of programs. Bookmark is strong flatline defense and can let you store some of the cards you're stacking up from all this trashing, even providing you with a bonus card for your trouble when you cash it in. As mentioned before, Cortez Chip is a two-credit swing at minimal cost, and it drains those credits from the Corp's coffers which can be powerful. Crash Space is also nice flatline defense, and it's less dead against people not using tags when Geist uses it. Decoy is a no-frills anti-tag card that's a lot more attractive with self-replacement. Feedback Filter works against brain damage. Forger is MORE anti-tagging. Muertos Gang Member, as mentioned, is worth two cards instead of one. Sacrificial Construct can save your hardware or Icebreakers. Same Old Thing is handy if your build has powerful Events.

There's a lot of protection against "tag and bag" in here, which can make Geist a good choice to take on anyone using Scorched Earch. Most runners will have to choose two of: holding a large hand, playing their tag/meat damage defense, getting other stuff done. Not so for Geist! With the ability to draw while defending himself from tags combined with the general ability to draw on the corp's turn with ANY trash card, Geist can be incredibly frustrating to flatline and can be built to be even more so with a number of "trash me to laugh in Weyland's face" cards.

Street Peddler deserves special mention. If any of the three cards it grabs are trash cards, then it basically turns into Diesel (you get the trash card AND two regular draws for playing the Peddler, one when you trash it and one when you trash the card you got from it) but for only one influence and with the ability to dump something nasty onto the field mid-run or on the corp's turn.

All-nighter is a lot more attractive as a random include (rather than a combo piece) when it replaces itself, potentially offering a critical click when it's needed or in the worst case simply being cycled out of your hand at literally no cost (one click and one card to play, one click to activate, and it yields two clicks and a card), meaning literally the only reason NOT to run it is if you need the influence for something else. Even if it increases your deck size past 45! So if you ever have spare influence in a Geist deck (unlikely as this may be), filling it up with All-nighters is essentially free.

If you're willing to compromise on SMC/Clone Chips, then some of this stuff can be slipped into the program-focused Geist builds too.

Whoa. That got long. Anyway, Geist is very interesting to me as his ability turns a number of subpar one-shots into "a bonus on top of your click for a card action", as well as improving the efficiency of trash cards and allowing them to be used en masse to form a full strategy, as well as making them efficient enough to use in a more traditional build (allowing card effects to be used that otherwise just wouldn't be worth it)

(Data and Destiny era)
LordRandomness 219
It won't let me edit, but I did want to point out that several of the trashable programs ALSO function well to defend Geist from flatlining, tagging, and tracing. Add in the fact that he wants link if he's using the Cloud breakers and a deck that effectively combats most of the nasty stuff corps can throw at you begins to take shape. — LordRandomness 20 Jan 2016
This is a fantastic review. I wish I could give it more likes. Very informative about an ID I'm curious about but not really wanting to test out myself. :P Well done. — WayneMcPain 20 Jan 2016
I run a deck with Faust because Faust is really strong and just gets stronger when you can pull cards out your ass mid run when you derez the archer you just ran through with a cresentus. Plus the in faction Spike, Shiv and Peacock provide nice answers to Wraparound, Swordsman and Turing respectively. — Hyperbolic_Mess 20 Jan 2016
I just bought this card, and the card draw works well with Faust, which is convieniently in the same set. I think one of his strengths in the ability to trash mid-run to prevent a flatline. — NobbyNobs 1 Feb 2016
Yeah so uh — LordRandomness 9 Mar 2016
Oops. Yeah so uh, 3x Tech Trader is probably non-negotiable here now. It's an in-faction Connection, costs 1 credit, gives one credit whenever you use a trash ability. Getting a click AND a cred for every trash is very strong. Getting a click and MORE than one cred for every trash borders on ridiculous. — LordRandomness 9 Mar 2016