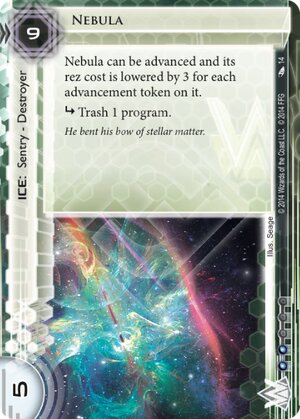 Nebula can be advanced and its rez cost is lowered by 3 for each advancement token on it.

He bent his bow of stellar matter.
Illustrated by Seage
Decklists with this card

The main comparisons are with Grim, because it has the same strength and routine, and Lycan, which is advanceable and in the same faction. Some other alternatives are Rototurret, Lancelot, Sagittarius, Ichi 1.0, Ichi 2.0, and NEXT Gold. Note that they are mostly Haas-Bioroid, who will likely prefer to conserve influence when they have their own options, but Jinteki and NBN will be debating the merits of splashing influence. (For a full up-to-date list of program trashers - aka destroyers - see here.)))

So the question you have to ask yourself is: How much is 1 Bad Publicity worth? If the answer is at least 4, obviously pick Nebula over Grim. (Assuming influence isn't a problem, and you're not considering anything else.)

Note that the value of Bad Publicity depends on your asset & icing strategy. Using binary ETR ice (e.g. Ice Wall/Quandary), and rushing stuff out early? Bad Publicity probably doesn't matter, and Grim is a good pick. Anything else? Consider something else.

Strength 3 -> 5 is a big jump for sentries, especially in straining Mimic, Femme Fatale, Alias and Pipeline. Interestingly, they synergize with each other for the purposes of bluffing. Archer is the only Destroyer at the moment with higher strength (at great cost.) +2 strength usually means at least +2 to break.

Overall, it's an interesting ice, with it's own situational uses. Haas-Bioroid is unlikely to give it a moment's notice, and Weyland will debate between it and Lycan (but potentially include a mix of both.) Jinteki and NBN may not think much of it, outside of Trick of Light decks, given the plethora of other options and small upside for the cost.

(Chrome City era)
EnderA 488
I've got to say, I've tried Lycan a bunch and it just doesn't work (I even made a specialised Morph deck over here http://netrunnerdb.com/en/decklist/16661/titan-morphin-). With NRE and Yog.0 making a comeback, and Mimic being as popular as ever, I think it needs to stay in the binder for the moment. Nebula, on the other hand, I really like. Grim lost some currency when d4v1d came out unfortunately, but Nebula (especially if you can advance it a couple of times) hurts less to rez as you aren't taking that bad pub. I also like this in a deck running Wormhole (almost certainly my favourite ice of this cycle) as you can bluff between the two. — unitled 5 Jun 2015
Very true! Good to hear your experience. — EnderA 6 Jun 2015
Because this exists, any ICE with three advancement counters could be a free-to-rez program trasher. Nasty stuff. — LordRandomness 28 Jan 2016