The first time each turn the Runner draws a card, gain 1credit.

We Are What We Eat.
Jinteki • Emilio Rodriguez • Business First 30
All sets:
Links: Decklists | ANCUR 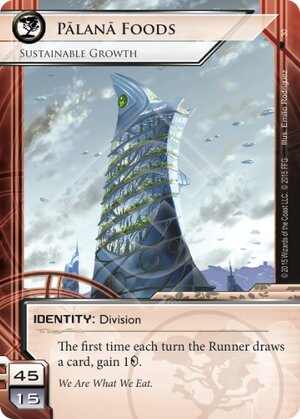 Guys. Palana Foods. It's finger-licking good. I'm loving it. Make it great, and it'll let you have it your way. Eat fresh. It's way better than global foods, it's Jinteki's.

Palana Foods is the 5th "gain 1" identity. How does it match up to it's peers? More exactly how much money can you expect to gain when you put that power in the hands of your opponent? Let's run down the list by considering an average game with this double-barred ID:

Sometimes however, Pālanā Foods: Sustainable Growth is even better than the best economy identity in the game. That's because Haas-Bioroid: Engineering the Future might have to triple-advance it's 5/3 agendas, or otherwise doesn't have anything to install. Against MaxX: Maximum Punk Rock and Wyldside you will gain credits every turn regardless of your actions and Drug Dealer, I've Had Worse and Astrolabe trigger on the corporation's turn for extra credits. You haven't seen the power of a credit every turn until you've played against one of these cards; it really takes the biscuit.

But when it comes down to how to split the bill, how do you spend all that money? Here are a few ideas:

Ultimately there's just so much you can do with Pālanā Foods: Sustainable Growth that it's always down for a second serving.

(Business First era)
RubbishyUsername 434
All I can say about this ID, and moreover this review, coming from Magic where Cephalid Breakfast, Cheerios, Pixy Stix and Eggs have all been deck names, this has made me smile. — FatalSource 17 Mar 2016
2

So the question that is on all our minds is:

How the fuck do we pronounce Pālanā?

The International Alphabet of Sanskrit Transliteration defines the symbol ā as equivalent to the IPA phoneme /ɑ/ - as in "bath" (Received Pronounciation). There are many differing orthographic interpretations involved in what ā represents, including some English interpretations using it as a substitute for the IPA /eɪ/ - as in "pay" (RP). However, as Sanskrit is the primary liturgical language of Hinduism and is used primarily in India, the Sanskrit interpretation of Pālanā is probably the intended pronunciation here. Besides, "pay-la-nay?" Ew.

Trickier is the /a/ in the center. The symbol "a" has at least seven different vowel sounds in English and let's not even consider that we aren't supposed to approach this from an Anglocentric perspective. For my part I'm considering that since this /a/ is distinct from /ɑ/, it can't be the same sound or they'd use ā all the way through. The best interpretation I can give for this middle a is to define it as /æ/ - as in "hat" (RP). Thus, Pālanā can be pronounced /pɑ'lænɑ/ (pah-LA-nah).

Pālanā is a real place

(Crimson Dust era)
Agenarchi 76
Great, because of that tl;dr I now think of the Minions from 'Despicable Me' when trying to pronounce Pālanā :D — Krams 7 Sep 2017