Play only if you stole an agenda this turn.

Choose a server. The Corp trashes 1 piece of ice protecting that server.

Early permutations of the kraken proved to be insatiable, ice-devouring marauders. Not much has changed.
Neutral • Liiga Smilshkalne• Humanity's Shadow 90
All sets:
Links: Decklists | ANCUR 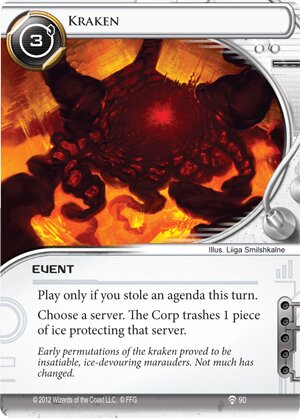 So, this is an interesting card.

On the one hand: Anything that can only be played by the runner on a turn they stole an agenda is a card that has an incredibly narrow firing window. If we discount the last one, since the game is over, most runners in a winning game will steal 2 or 3 times. That means anywhere from 0 to 9 potential clicks where this card could be fired. This is bad. Most clicks of the runner's game this card just sits in their hands like a lump.

On the other hand: The effect of Kraken is enormously powerful. It trashes a piece of ice regardless of whether that ice is rezzed or not, without the runner ever getting anywhere near it. Emergency Shutdown players understand how big of a deal eliminating ice from afar is, and this is much more permanent. Its a bit of a problem that the Corp gets to choose which piece of ice in the server gets the ax, but not that big of a deal. Many servers have just 1 piece of ice anyway, and multi layer defense tends to have only the essential layers. This is because, basically, the corp. doesn't install ice at random, it has an objective.

In general, I'm inclined to say that splashing a copy or two of this card into a runner's deck at random isn't usually going to be worth it. Games where you get it late and you are already on game point. Games where your steals happen last click. Games where their ice is in such a way that they can choose one that doesn't matter on the critical server.

A runner who has an ice destruction/derezzing plan, however, can definitely use Kraken. Leela Patel: Trained Pragmatist, is the obvious choice, but anarch decks that use cutlery and parasites can get a lot of use out of this card as well. One destroyed piece of ice the corp can tolerate, but a critical mass can leave them with unprotected servers, and an unwinnable game.