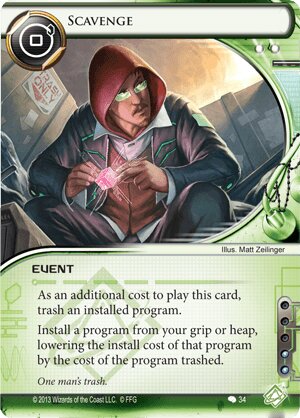 If you do, install a program from your grip or heap, lowering the install cost of that program by the cost of the program trashed.

This card is great in conjunction with icebreakers that "run out", since it can trash an installed icebreaker and then install the very same one back from the heap! This possibility is confirmed in the official Netrunner FAQ.

The net result is that you can recharge a spent breaker without paying any more credits. Key targets for this card include the Cerberus family of breakers, D4v1d and Overmind. At present, we can see that the card is very popular in Prepaid VoicePAD Kate "Mac" McCaffrey: Digital Tinker decks as a Cerberus "Lady" H1 recharger.

The card is also a great way of rearranging your breakers, for example when you are at the MU limit and wish to replace a breaker in play with one in your grip or heap. Again, the card helps realize this goal at a reduced cost.

Another potential use is with Cyber-Cypher, to redeploy the breaker to another server at zero cost.

Overall the card is very strong, particularly with breakers that expend power counters.

(Data and Destiny era)
Hayati 48
Another use case for Scavenge is rehosting programs. For example if you first install a program (i.e. Sage or Yog.0) then a few turns later install a host (i.e. Dinosaurus) and use Scavenge to reinstall your program onto the host. It may not be the greatest move of all times, but it can help you install things in the order you need them while still making use of hosting mechanics. Another possible use of Scavenge could be changing the amount of power tokens on Atman to better match the ICE you are facing. Again, not the greatest use, but if it gets you into a server you can't get into another way it might be worth it. — Krams 18 Nov 2015
I've also used it to cheat big breakers into play with London Library. Host on the Library, Scavenge it into play off the library, and bam. Turn one Morningstar or Torch is a beautiful thing. — slobad31 18 Nov 2015
Scavenge also changes the target of femme fatale. Great to reboot à early overmind after the set up. At 0 cost, it interacts greatly with comet. test run + scavenge in 1 click is crazy! — Him 18 Nov 2015
This was clarified by Damon - no, you can't reinstall the same program unless you have another copy of that program in your grip. — MrHuds0n 19 Apr 2016
Protege: when did this happen? The latest FAQ explicitly talks about this interaction. — Therad 30 Apr 2016
2

Now that London Library exists, Scavenge and Exile: Streethawk may get some extra juice. With one Torch in the bin (perhaps via Inject? Or you can just let a Torch expire on your library, if you're ballsy) and one in your hand, you can host the Torch onto London Library click #1, Scavenge it with click #2, and enjoy your free program on click #3+ without ever worrying about paying that silly 9 credits. Femme Fatale is also a good candidate for this strategy, though you would lose out on ping-ponging her targeting on the Library if you decide to install her legitimately. With some Same Old Things one could pivot the Femme (with one in the bin and one in play) with Scavenge if you're desperate.

(Breaker Bay era)
pbrand 266
You don't need two torches! With scavenge, the trashing is a cost, so the trashed card his the heap before the ability resolves. This means that you can London library a single torch, then scavenge it off the library and straight into play. — ouroborosglyx 16 May 2015
@ouruborosglyx is right — Friff14 16 May 2015
But you are correct, London Library makes scavenge WAY better. It used to only combo with Test Run, basically. Now, I'm imagining a LL deck that gets out Morningstar, Garrote, and Torch by turn 3 or 4. — Friff14 16 May 2015
Its worth noting that you can do the same thing with a single test run, but I guess 3 test run and 3 libraries adds consistency? Maybe a exile deck with massive breakers (garrotte, massive barrier breaer out of anarch, torch. (Leaves computer and starts grabbing cards to put together new deck) — Tsgstarwars 16 May 2015
Sorry, was typing my post while you posted yours. Guess great minds think alike :) — Tsgstarwars 16 May 2015