Whenever you install a piece of ice protecting this server, you may immediately rez it, lowering its rez cost by 3. 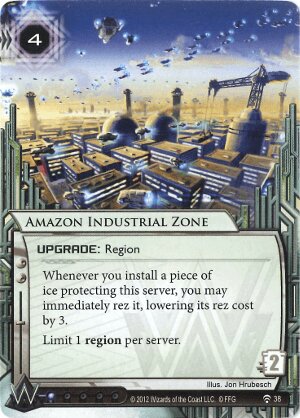 I think AIR may have potential as an alternative to Adonis Campaign, Launch Campaign, Private Contracts, The Root, and Worlds Plaza as a recurring-economy engine for Blue Sun.

Let's review the pros and cons compared with the gold standard, Adonis:

I don't know which is better, but it's worth testing.

(The Universe of Tomorrow era)
greyfield 3823
Worth noting that this card kills the surprize factor of your ICE, so the runner knows exactly what to expect and how much it's gonna cost him. — Shieldwall 1 Oct 2015
It's true, that this card kills the surprise effect, but that may not matter, if it enables the Con to build a Server, that the Runner simply can't run. — haywire 1 Oct 2015
It's not about surprise factor (good runners will know approximately what your ice is anyway). It's about paying money up front and losing your reactivity. Like, if you AIZ a tollbooth on your remote, it's that much easier for the runner to connect with maker's eye. — bblum 3 Oct 2015
Right. Though that's a problem with Blue Sun generally - good runners know they have more freedom to stress your credit pool until they find a snapping point. As it stands, I've gone back to Adonis/PriCon for the time being. But there might be a build that can better utilize AIZ; part of the reason for that was that I made my ice base lighter and thus profited less from AIZ. — greyfield 5 Oct 2015
2

I love the idea of this with NEXT ice and The Foundry: Refining the Process.

A big part of the problem with NEXT ice can be getting enough of them rezzed quickly enough to boost the collective power. This allows you to force-rez NEXT ice, and then draw another one to continue the process next turn.

(Chrome City era)
the.jxc 3
I've been running that deck for about a month. I don't think it's anywhere near competitive. It's a huge tempo hit, even if you can get a couple ice the first turn you use it. I have tons of fun with it and build 5+ ICE servers for peanuts, but I lose doing it. — Heinrich 5 Jun 2015