Green-two clearance is the highest level of security a corp can gain access to. Legally, anyway.
Haas-Bioroid • Mauricio Herrera • A Study in Static 70
All sets:
Links: Decklists | ANCUR 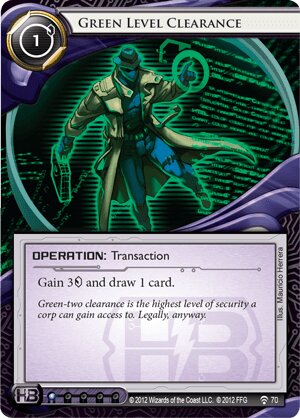 This card fills what I call the 'blank spaces' in a deck, though I'd honestly say its hard to find those nowadays. Perhaps if your deck was extremely 1-dimensional, this could do its job. Otherwise, you're probably better off with a card that provides more , draw or anything else, really.

I feel this card is best used in Weyland Consortium: Building a Better World, if you have the influence to spare, mainly because it suddenly becomes a Beanstalk Royalties plus card draw. Is it worth that 1 influence to add filler to your deck? That's probably up to you to decide. Kill decks want to find those meat damage sources and score decks want to find ice. This helps with everything, really.

I personally love this in BaBW and rarely exclude it.

(Chrome City era)
LynxMegaCorp 1336
The game is set in a dystopian future city which is controlled by an artificial intelligence construct called The Computer (also known as 'Friend Computer'), and where information (including the game rules) are restricted by color-coded security clearance. Players are initially enforcers of The Computer's authority (known as 'Troubleshooters', mainly for the fact that they shoot trouble), and will be given missions to seek out and eliminate threats to The Computer's control. The players are also part of prohibited underground movements (which means that the players' characters are usually included among the aforementioned 'security threats'), and will have secret objectives including theft from and murder of other players. — JanksonHoward 11 May 2017
The full order of clearances from lowest to highest is Infrared (visually represented by Black), Red, Orange, Yellow, Green, Blue, Indigo, Violet, and Ultraviolet (visually represented by White) (Think ROY G BIV, but with Ultraviolet and Infrared). Within the game, Infrared-clearance citizens live dull lives of mindless drudgery and are heavily medicated, while higher clearance characters may be allowed to demote or even summarily execute those of a lower rank and those with Ultraviolet clearance are almost completely unrestricted and have a great deal of access to The Computer; they are the only citizens that may (legally) access and modify the Computer's programming, and thus Ultraviolet citizens are also referred to as "High Programmers". Security clearance is not related to competence or even authority: clearance is instead a measure of The Computer's trust in a citizen. — JanksonHoward 10 Aug 2018