Whenever you encounter a piece of ice that was just rezzed, lose all credits in your credit pool. Gain credits equal to the rez cost of that ice. 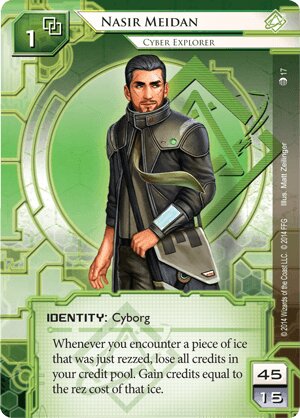 Remember where you were when you read these words, guys. Netrunner might NEVER BE THE SAME AGAIN:

The kindest thing I can say about Nasir is that he's a meta call. If your friends are all playing medium to large ICE, no assets at all and also are not very good at Android: Netrunner, Nasir is waiting for you with a bottle of dreamwine and ready to party.

(All That Remains era)
Quinns 1871
Nasir isn't bad, it's just a very hard deck to create and to pilot, which discourages most people from power playing it, then taking it to tournaments. Nasir would probably shine in an economy denial deck that makes use of cards like Running interferece, or Cyber threat, but I haven't levelled up enough to make that deck yet. — Jackpot 7 Aug 2015
Look at this guy playing a rather interesting Nasir list: https://www.youtube.com/channel/UC-8Ph6h3pRqpIatKjf5yhdg — Tacitus 12 Aug 2015
A couple of cards have come out recently which I really feel push Nasir up the rankings, cards like Film Critic, Drug Dealer, and Faust. Nasir requires a very particular rig, one where you can ditch creds mid-run. If you have this, Nasir's ability can gain you more credits than, say, Kate over the course of the game. He works best pressuring centrals hard, with Interfaces installed off Personal Workshop. There are a few deck lists floating around, and I encourage anyone to give him a go, not least for the surprise factor when you pull off a shock victory. — unitled 9 Sep 2015
Don't have him, but he looks awesome! — NobbyNobs 10 Feb 2016
8

Nasir has been my favourite runner identity since he was released. While I find it a lot of fun and he allows perhaps more Shaper Bullshit than any other identity, I must say he isn't particularly competitive. I don't expect to ever see a stable tier 1 Nasir deck with decent matchups across the board, simply because his power is that he's fundamentally not reliable. While his ability can indeed generate a lot of income depending on what ice you encounter, this comes at the cost of the corp having greater control of your economy than you do.

That said, the drawback can be built around and Nasir can be played to some success. Obviously, Personal Workshop, recurring credits (Toolbox, Cloak, Net Celebrity, Cyberfeeder, Scrubber) and Ghost Runners are a natural fit for Nasir, as are Cerberus and the Shaper boost-per-run-breakers (Battering Ram, Gordian Blade). Order of Sol can accelerate the Workshop from 1 to 3 per turn. It is a lot to set up, but Nasir's ability means you can do it while running. In fact, the more ice that gets rezzed, the faster you get set up, and you can use cards like Parasite and Crescentus to increase the number of ice the corp needs to rez. Builds like this tend to have decent to good matchups against glacier decks, especially HB and Weyland. Replicating Perfection can be a problem since a build focused around recurring credits can have trouble making more than one run per turn, and psi games are hard when you don't have control of your economy. And of course, NBN fast advance - which is and has long been one of the strongest and most common archetypes - is the worst matchup since they tend to have few and cheap ice and hard-to-trash assets and upgrades. Not exactly a recipe for winning tournaments.

Another way to go is Faust, which makes you less dependent on credits for making runs. You don't have the pancakeengine in faction, though, which makes it harder to power it. The most viable archetype I've found uses Faust combined with Bookmark to enable Apocalypse. Of course, this comes with its own set of problems. The NBN fast advance matchup is still only decent at best, assuming you have Clot, and teching specifically against Faust is already a good idea in the current meta.

All in all, Nasir is great fun to play! He spins the game around in a way no other runner does. Only Hayley rivals him when it comes to mid-run Shaper Bullshit. He'll make sure you know every last detail of the run timing structure. He can happily facecheck ice while broke, can really mess with corp headmath, and the Faust-Apocalypse archetype does very weird things to the flow of the whole game. But a lone Pop-up Window can still keep you from stealing that NAPD Contract or trashing that damn SanSan City Grid.

(Business First era)
emlun 477
Reuse into product recall out of IG seems like an at least semi-valid play. — forktines 13 Mar 2016
Sorry. I thought I was commenting on the Reuse review directly above yours. Nasir's cool, yeah. — forktines 13 Mar 2016
Worth mentioning Xanadu in here somewhere too, probably. — LordRandomness 14 Mar 2016
Also Study Guide, dammit! Boost-per-run pales in comparison to boost-per-game — LordRandomness 7 Jun 2016
2

I love Nasir, but he doesn't work for one simple reason. Tags.

If a card came along that protected him from tags, then he might be viable. But as it is, Nasir is pretty much certain to end many turns broke. And then it takes just one Seasource or midseasons to bring him down. Running Nasir without resources is near impossible.