The Runner can spend clickclick to break up to 2 subroutines on Fairchild 2.0.

subroutine The Runner must pay 2credit or trash 1 of his or her installed cards.

subroutine The Runner must pay 2credit or trash 1 of his or her installed cards.

To threaten my treasures is to incur my wrath.
Haas-Bioroid • Liiga Smilshkalne • Blood Money 31
All sets:
Links: Decklists | ANCUR 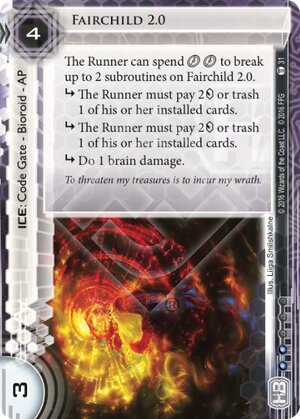 This is a really really good ICE! Anarchs can't kill it with Spooned and clicks like Fairchild 3.0 as they can only break 2 subs. On the other hand it won't stop the runner, so it's more interesting on a central when they are running through it multiple times. The tax of 2 clicks + 2 creds is really nice and makes it more taxing then Fairchild 3.0 without a breaker (or at least the same)! The standard Anarch breaker Black Orchestra needs to pay 5 credits (3 to break 2 subs + 2 tax for the ICE).
It's also a good Tax for Gordian Blade as 3 subs still mean 3 creds regardless of Gordians strength.

For the other "standard" breakers:

So this is a nice taxing ICE, love to use it on all Central Servers. Runners hate it.

This card is insane. It gives SO MUCH tax for only 4 rez cost, it is really nuts. It even stands up to the tax Eli gives, but not being on the MWL this is a much better alternative. Right now I think is the most taxing bioroid cost-efficiently talking