The first time the Runner passes a rezzed piece of bioroid ice each turn, you may rez a bioroid, lowering its rez cost by 4. 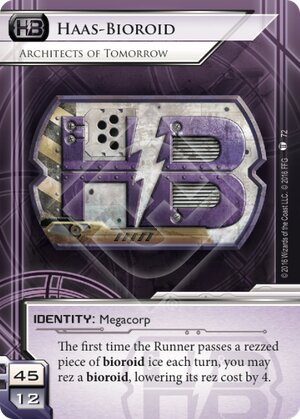 Every HB identity will be compared to the dominant Haas-Bioroid: Engineering the Future and it's "1 the first time you install a card each turn". Architects of Tomorrow doesn't give you credits but lets you rez ice for 4 less once per turn.

The ability effectively triggers on two conditions: you have a rezzed piece of bioroid ice that the runner is running through and you have an unrezzed piece of bioroid ice that you want to rez. The first condition is likely to occur in most turns in a deck built around this identity as such decks are bound to be loaded with bioroids and the runner will need to pass those unless they want to give you the win uncontested. Unrezzed pieces of bioroid ice are also likely to be available about half the time or so (assuming an install of ice every two turns) as you'll be inclined to delay rezzing until you've got the bonus, 4 is a lot of discount.

So you don't need to worry that the ability won't fire, it will often enough to be worth it. What you should worry about is whether the ability helps you. Obviously a 4 discount is very helpful, but there's an attached price. You rez ice before the runner encounters it, so you give up the element of surprise. Subroutines in general only fire when the runner facechecks the ice, so while subroutines may scare the runner from running or tax the runner when breaking them you shouldn't expect them to actually fire.

Not firing subroutines is not necessarily a problem. It just rules out certain strategies, like goading the runner into facechecking a Janus 1.0 with no clicks left and no breakers. But, eh, how often will you get that to work anyway?

HB is about efficiency and getting the runner to run less while spending less credits is efficient for the corp. And there are several good options available to you that work well with Architects of Tomorrow:

There are of course other options, these are just the ones I see as particularly worthwhile.