As an additional cost to play this operation, forfeit an agenda. 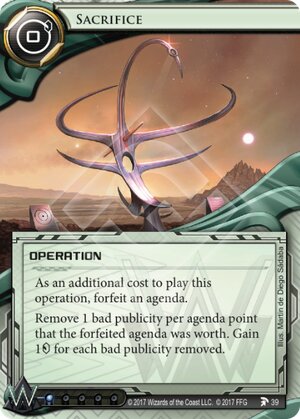 Once upon a time, we thought Weyland was an ordinary little corrupt corporation. Killing and Making Money were all it was about. Typical Corp behavior, right?

But then we saw another layer. We saw a Weyland that was interested in Making the World Better, in helping children reach their potential, in finding new realms for humanity to live. And, if I remember correctly, this was a "rebellious element" within the corporation, a noble-minded executive who actually wanted to do some good, by taking the human race into space where we might have more room to live.

But really...was there something even more complicated, more sinister, behind BOTH groups? What might motivate ALL of this: the killing, the money-making, the philanthropy, the vision?

A Cult. Hidden at the highest levels. In Space.

It's possible. We have creepy stained-glass window funeral parlor/temple guy we have slightly-more-than-just-pop-culture-image. We have Ancient Space Deity (An evil Oyarsa of Malacandra?) and now, we have this card: Incredibly creepy sacrificial altar/execution chair exposed to the Martian elements.

Weyland, why did you REALLY want to go to Mars?

A card for Jemison Astronautics: Sacrifice. Audacity. Success.. It's great at removing the bad publicity from the 2/1 card Jemison decks love to start off a trade chain with: Hostile Takeover.

You'd think it would be great for other things as well given Weyland's appetite for bad publicity, but once rotation hits that list will be rather small. Take a look at an overview of corp cards interacting with bad publicity. Outside of the core set (Posted Bounty, Hostile Takeover) and the spin cycle there aren't many cards that deal bad publicity and most of them aren't in Weyland:

Of these only Checkpoint strikes me as a good fit for Jemison decks, with 4 it's easy enough to rez and it's pretty taxing, even if the runner fires the trace a trace 5 will generally require a few credits and as Weyland you may well be rich enough to raise that to a trace 8 or so to make the runner pay a good amount for passing.

This all doesn't mean Sacrifice is worthless. Not at all. The ability to remove the downside of Hostile Takeover is as useful in Jemison decks as the ability to shuffle cards from archives into R&D is in, well, any deck. It's an operation so it's easy to play Consulting Visit.

One thing to note is that I think it's not allowed to play Sacrifice if you cannot remove bad publicity since the effect doesn't change the game state. Not 100% sure though.

Why would you want to play Sacrifice without bad pub to remove? Well if the runner has trashed your Quarantine System or you simply don't have it installed yet it's a good way to trigger Jemison's ability.

Overall this is a good card for Jemison. I doubt it'll see much use outside it though.

(Station One era)
Silv 302
Yeah, probably only see play in Jemison. Though I don't think I'd use Consulting Visit on it. As a double CV would negate the benefit you get from Jemison. Also you can't use Bryan for it since it isn't a transaction. — quailman2101 25 Mar 2017
Ugh, operation, transaction, too similar words. You're right. Will edit the review. — Silv 26 Mar 2017
0

It really puzzles me in which deck this card is supposed to go into. The main problem with this card is two-fold:

The first issue means that you usually cannot play this unless you're playing against Valencia or you scored a Hostile Takeover. Until then it is usually a dead card. (ignoring Illicit ice or a stolen agenda) The second issue is even more severe: What makes Quarantine System and Oberth Protocol really nice is the fact that you can bank the click to play the card on another turn. This way you can fast advance 2/4 agenda or even a 5/3 using Oberth when sacrificing a one point agenda. Using Sacrifice means that you can only Install-Sacrifice-Advance for 3 Advancement tokens. This is a rather small return of investment and you gain only one credit by using it. Even worse you cannot transform a 2 pointer into a three pointer with this card and this is in my opinion the fatal blow for this card in a Fast-Advance style.

Supposing this card is meant for another archetype I struggle to see how that one would look in Jemison Astronautics. Removing bad pub is either useful to disable Blackmail or to make running against a glacier deck costlier. This might mean an HB deck running Domestic Sleepers can use this to disable Valencia or run illicit ice like Fenris, but realistically I don't see those strategies take off.

All in all I can think of using this as a one of to ensure that you have one ability to sacrifice agendas which cannot be trashed and can be your 'silver bullet' against Valencia matchups.

(Station One era)
Capstone 40
Perhaps it's a card designed for the future. I could imagine FFG putting in a bad pub removing card in pack 2 of Red Sands and some new bad pub generating cards later in the cycle. — Silv 6 Apr 2017
I see this as a 1-of in Jemison to 1) clear the BP from Hostile Takeover and 2) sacrifice (see what I did there?) HT to trigger Jemison's ability for when Oberth is trashed OR already rezzed and you want to FA a 4 / 2 from HQ in one turn. That 4/2 would be Fracking, right!? — LynxMegaCorp 6 Apr 2017
In Jemison this is a Biotic Labour that generates you 1...Not too shabby. It isn't THAT good, but quite useful for cycling old Hostile Takeovers into something more useful. — Handsome Jack 6 Apr 2017
Lynx, the problem is that, without Oberth, Project Atlas is literally the only agenda this lets you score for an increase in points (besides Merger *vomits*). Trading Hostile for a 3/1, even one with a cool effect, generally isn't worth the increase in agenda density from playing those 3/1s. And Project Atlas is going to ROTATE soon. Yuck. — Netrunnerunner 8 Apr 2017