Sell the dream-show them how very much they want to be rich, and they'll convince themselves that someday, they will be. How can they revolt against their future selves? -the New Gospel of Wealth
Neutral • Emilio Rodriguez • Creation and Control 23
All sets:
Links: Decklists | ANCUR 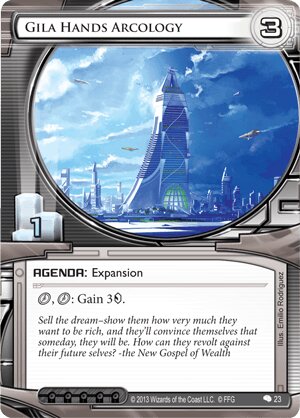 It's the Economy Stupid

This card doesn't look like much, however Gila Hands Arcology is an economy card, not shiny, or dazzling, just faithful & sure. It's the tortoise rather than the hare. Since often the difference between victory & defeat is a single this card certainly has a place.

Economy combos with everything

Snare! - the requirement to hold onto 4 at all times is made attainable since the minimum the corp could now generate per turn (if fully spent on generation) is now 4 instead of 3 or use Gila Hands Arcology often to maintain 9 minimum if you suspect runner is packing Account Siphon

Trick of Light along with advancement counters on some other card can get Gila Hands Arcology scored out of hand in one turn.

Creates perpetual 1.5 per economy for the rest of the game after scored

Can allow corp to quickly recover from Account Siphon and still allow corp.

A number of winning decks say they ONLY lose when Gila Hands Arcology is buried in R&D. The earlier it is scored obviously the better. As a faithful econ card at no influence cost, this card can find home in many decks. It's ability is flexible and doesn't require any combos to use it successfully.

(Data and Destiny era)
chris_walker 631
Gila Hands definitely has a place in some corp decks. The only thing is, with corp economy as strong as it is, the 1.5 credits a click can often seem negligable. Because of that I feel it often gets overlooked. But in low ice density decks like a lot of Blacktree builds in can be invaluable as Siphon insurance and topping you up enough to make sure you can always fire your traps. — Genevaman616 28 Nov 2015
Biotic Labor is the easiest way to out of hand it. Trick of Light is fine, as is any fast advance, but yeah. — LordRandomness 21 Jan 2016
9

Arcology is a concept imagined by the Italian-American architect Paolo Soleri, as an utopian structure mixing architecture and ecology, hence the name. He tried to apply this somewhere in Arizona as an ensemble of quite open building in the middle of the desert, where still leave a bunch of people, the kind of idealist ones, I suppose.

In case you wonder why you see my name on so many reviews these last days, it’s because I go chronologically through unreviewed card to give those forgotten children a few words.

Most of the time, they are bad cards, and I can figure why even if I didn’t play them, and it can be fun to analyze. More rarely they are good card with obvious effect and it becomes hard to not just say "well, that card does what it tells on the textbox and it’s nice in some deck."

Gila Hands Arcology is such a card. It’s a 3/1 agenda which effect is to earn 3 with , which is a nice econ support and shows useful in never-advance shell-game deck (Jinteki: Personal Evolution likes it well) but hardly in decks that want to minimize their agenda density, neither in deck which factions commands the agenda composition.

So science-fiction, especially cyberpunk, took the word arcology and applied it to some large closed sky-scrapper, as the one showed on the illustration. What makes it special is that they’re supposed to be self-sufficient (which is the only thing it has to do with the original concept) but cyberpunk being cyberpunk, they tend to be quasi-totalitarian corporate-controlled space.

Think about it, next time you .

(Data and Destiny era)
Lupus Yonderboi 229
Lupus, looks like we were typing up our reviews at the same time, I don't think I would have bothered if I'd known you were working on it at the same time. Thank you for doing what you are doing as this is kind of my vision for netrunnerdb.com as well. I would prefer if you wouldn't mind adding Pro/Con/Summary sections to your reviews, totally up to you just a suggestion. — chris_walker 28 Nov 2015
Sorry meant to suggest adding: Combo/Pro/Con/Summary sections — chris_walker 28 Nov 2015
In fact, I wrote the review I published yesterday a few days ago. Then, seeing yours, I felt the urge to publish them. Yeah, that's childish :) About my style, I prefer to do informal review rather than listicles. Keep on reviewing, anyway, you do good job at this. — Lupus Yonderboi 28 Nov 2015
Thank you both for your many great reviews. I originally proposed the concept and design of the reviews section of nrdb, and the vision was for exactly the kind of informational reviews you both write :) — Ber 7 May 2016