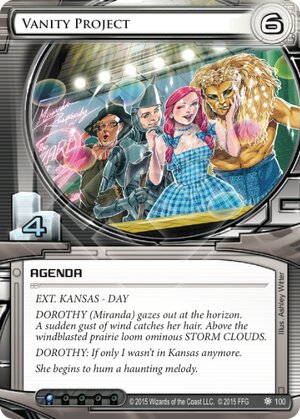 I know what you're all thinking. "Holy low agenda density, Batman!" And you're right to think that--because that is literally all this card does, besides provide a nice big box of flavor text. But before you start throwing this in every deck, a few thoughts.

As anyone who's ever played a Mandatory Upgrades deck will tell you, six advancements is a lot. Using only the standard advancement action, the most efficient way to score is install it click three, then triple-advance it two turns in a row. But, that means you're skipping two turns, probably discarding the two mandatory draws, spending 6, and the runner still has two whole turns to break in. That's a long time, even for a solidly built glacier.

You can speed up the process with Midseason Replacements/Psychographics, or with Mushin No Shin. But these have problems of their own; surrendering an agenda for Midseasons is risky if you're running high-value agendas like Vanity Project, and if you can't realistically threaten a trap Mushin isn't much use.

Maybe you don't need to bluff it or protect it: maybe you just tell the runner "If you steal this, you will die." Punitive Counterstrike loves high-value agendas, and with additional support from Scorched Earth you have pretty strong murder potential. Unfortunately, runners are pretty well protected with their Plascretes and IHWs, and Film Critic kills Punitive cold. This also won't work if they've already stolen 3 or more points, or if they can steal multiple agendas in one turn, since they win before you get a chance to retaliate.

But, suppose you've got a plan, and you think you can actually score this monster. What advantage does this give you? Simple- it makes it so you only need to score two agendas to win the game, a Vanity Project and a 5/3 of your choice. Conveniently, this also leads you to the ideal six-agenda spread: two Vanity Projects and four 5/3s. You could also go three VPs and three 5/3s, but since Vanity Project does cost 1 influence each I think most corps will stick with two.

Netrunner is a fair game, though. Sure, you only have to score two agendas to win; but the runner also only has to steal two to win as well. Your agendas will be spaced out more in R&D, which helps to offset this lower requirement. But, because you need such a large scoring window, it's not unlikely that you will find yourself holding 7 agenda points in hand, hoping they don't have a Legwork. To avoid this predicament, it is even more important than usual that you include Jackson Howard so you can dump agendas; luckily, with only six agendas and nine potential reshuffles, you should be able to hold off until you're good and ready.

Vanity Project can't be a last-minute change to an existing deck; if you want to do the six-agenda spread, you have to start with that before you start construction. But in a strong glacier and/or Punitive deck, it could go a long way.

(Old Hollywood era)
tiedyedvortex 4606
3 Vanity Projects, 3 Market Research. They (probably) need 3, you only need 2. If you play tag storm..... — Shockwave 12 Aug 2015
I could see this as a one of in a Harmony Medtech deck, alongside some Future Perfects and Medical Breakthroughs. If you manage to Mushin it out and score it, you're likely to score a MB out of hand. On the flip side, if they steal Vanity first, you are in a bad bad place... — WayneMcPain 12 Aug 2015
All we need now is a 40 card limit Weyland ID, and you could have three of these and a Government Takeover. :P — Thaddux 13 Aug 2015
Shockwave, that only works in TWIY* because that's only 18 points. However, when Global Food Initiative releases, anyone can play the asshole spread of three GFI, two Vanity Projects, and a 5/3 of their choice. That does cost 5 inf, though. — tiedyedvortex 13 Aug 2015
Tiedyedvortex, it will also work in the Data and Destiny ID SYNC. Everything, Everywhere — Shockwave 13 Aug 2015
Oh man! I was already excited for Sync and I didn't realize it was a 40/15. I'm going to tag so many runners. — tiedyedvortex 13 Aug 2015
I think this will find a spot in Industrial Genomics, further reducing their agenda density. — Fassbinder 14 Aug 2015
#early premier make this possible to score, just if you set up three of them on the board — eXister 31 Aug 2015