If Disposable HQ is accessed from R&D, the Runner must reveal it.

When the Runner accesses Disposable HQ, you may add any number of cards from HQ to the bottom of R&D. 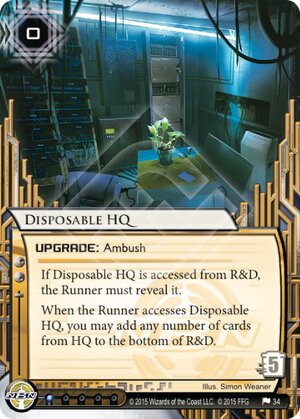 The obvious use of this is to dump agendas from a flood. They will be incredibly safe in most cases. Perhaps put this on your scoring server, or an econ server, or R&D, whatever. Somewhere they have to run. Then they have to choose whether to pay the insane 5 trash cost, or have it trigger every time they run that server.

Or, they might just access it naturally in R&D, HQ or even Archives. Perhaps you fake-out a dump of agendas, and stack it with lots of face-down non-agenda cards, including this, then tuck the agendas that are in your hand when they run archives. Or put it on HQ, so when they run to steal agendas from hand, they only get to access once before you tuck the rest.

That's all well and good. What really excites me about this card is its potential in Cerebral Imaging: Infinite Frontiers, for the Power Shutdown/Accelerated Diagnostics combo. (If you're unfamiliar, it's a deck designed specifically to trash all of R&D with Power Shutdown, then play Accelerated Diagnostics repeatedly until it wins you the game either by fast advancing agendas or killing the runner.)

A problem that deck often encounters is having certain cards in hand when it wants them in archives, to put back into the deck in a particular way with Jackson Howard after Power Shutdown. Normally, you overdraw, then toss them in archives, or play Reuse. But Disposable HQ doesn't just throw them in archives. It lets you reliably stack the bottom of the deck exactly how you want it. Instead of trashing your entire deck with Power Shutdown, you trash all the way down to the cards you put on the bottom, in your chosen order. (Be sure to remember how many you put down there!) Then you Accelerated Diagnostics for the top 3. Oh, look at that, the cards are exactly how you wanted them! This card can help you combo off faster against an aggressive runner.

(Edit: Unfortunately, it seems this is too clunky, slow, and not worth the tight influence slot in CI 7 Shutdown. See www.anrnz.com)

All that, for a 1 influence upgrade with a trash cost of 5, that you hardly even care if they even trash it. Does it fit in every deck? No. But it's absolutely useful in the right situation.

(Business First era)
EnderA 479
It can also be used by The Foundry decks to put Ice back into R&D so that Accelerated Beta Test has a better chance of finding Ice. Just remember to use a shuffle effect first of course. — Zakalwe 24 Mar 2016
Also, great review! I love your idea of a fake-out agenda dump and pointing out that this Ambush can be triggered from Archives. This would make Disposable HQ a possiblity in Industrial Genomics decks too. — Zakalwe 24 Mar 2016
Maybe now is the time for Showing Off to be a thing? — WayneMcPain 24 Mar 2016
The other use is to make sure your Ambushes go off if HQ. Discard non-ambush cards down to the number of cards they will access, and they are sure to hit the trap. Done at the right time, this can win games. — CascadeHush 11 Jun 2016