"Let go your material attachments and realize that we are all immaterial."
Shaper • Elisabeth Alba • The Liberated Mind 81
All sets:
Links: Decklists | ANCUR 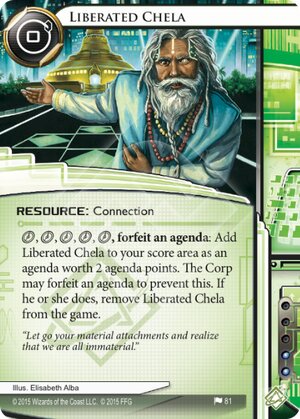 Let go your material attachments and realize that we are a- OH MAN! This Fan Site you have is totally bitchin'.

Unfortunately it still isn't possible to win without any steals unless the Corp is dumb, since Fan Site guarantees they have an Agenda to forfeit to stop him going off. In terms of the click requirement...you likely need Hyperdriver or Amped Up in a pinch. You want to be able to install and trigger him in the same turn.

This makes the whole thing start to get pretty janky and unwieldy (it only slots naturally into a deck already running Fan Site AND extra click cards) but the payoff (two Agenda points or force the Corp to forfeit) is unique so that's KIND of to be expected. It might be worth shoehorning into decks that have a very specific problem with losing at around 5/5.

(The Liberated Mind era)
LordRandomness 223
Correct me if I'm wrong, but you can get 3x fan site off of one agenda scored, get 2x liberated chela (they sacrifice one) and then use notoriety to close the gap? — nesou2 27 Jul 2016
Unfortunately, the Corp can still forfeit whatever agenda triggered Fan Site to stop one of the Chelas from working. Although if you used THREE Chelas it would just scrape through. — LordRandomness 10 Aug 2016
So here's my question: what exactly is going on thematically here? In the context of the Megacorp trying to advance world-shaping agendas vs. the Runner trying to tear them down, what is the relevance of whatever the chela is doing for the runner? I'm okay with Notoriety being agenda-point-worthy since obviously the corps' stockholders get angry when their enemies gain fame, but who cares about the runner transcending materialism or whatever? — beladee 21 Oct 2016
My guess is the runner spends his five clicks to consolidate and popularize a new-age movement focused on rejecting the consumerist world. Which, naturally, hurts the corporations that thrive on consumerism. — H0tl1ne 18 Jan 2017
1

Probably the best current use of this card is to turn that -1 News Team into a 2 point agenda. If you're playing this along with Temple of the Liberated Mind, All-nighter or Hyperdriver or Amped Up then you'll only be too happy to take News Team as an agenda.

Another use is for Fan Site although this has significant downsides when compared to News Team. For a start, Fan Site has to be out before the corp scores an agenda. Second, the corp now has an agenda which they might be willing to forfeit in order to stop you cashing in Liberated Chela.

Notoriety has fewer problems than Fan Site - the corp doesn't need to score first although you might not like the economy of turning 1 point into 2 for the cost of getting Liberated Chela set up - however if you're on six points it could win the game for you.