Zealous Judge can only be rezzed if the Runner is tagged. 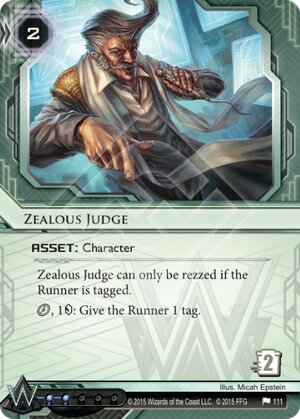 So, this is a very interesting card. On the face of it this is just 'Win More' at its finest. If the runner is tagged why are you clicking to add tags, instead of clicking to Scorch/All Seeing I/Closed Accounts?

But having played with it a time or two, the true effect of this isn't so much to bury the runner in tags as it is to make it harder for the runner to de-tag.

Consider. Second click, runner runs R&D through a Data Raven. Plan is to de-tag third click. After he passes it, however, you rez the ZJ. Now the runner has to spend his third click running over and trashing the ZJ, or else his de-tag will be undone on your first click. This is still doable. Runner who gets tagged second click can run over to ZJ and trash third click, then detag fourth click. But throw in a Snare! on the second click access? Or another Raven in front of the ZJ? It's easy to imagine situations where the runner can't get de-tagged.

This is basically an attack not on the runner's econ (the all important Corp vs. Runner cred totals aren't naturally changed by the corp spending 2 to rez, runner spending 2 to trash), but on their clicks. If they have planned out a click to detag they may receive an unwelcome surprise when it basically takes 2 clicks and 4 creds instead.

(Fear the Masses era)
Waltzard 370
You left out the most important part: Dude is stylin' — LordRandomness 23 Jun 2016
Runners attempting to Siphon second click beware! Siphons where this card is a possibility must leave the corp at less than 2 credits or risk judgement! — Pilltechre 25 Jun 2016
Argus really loves this guy in a rush setup with Snares and Data Ravens. Picture a scoring remote with a Data Raven defending it, and a bunch of other unrezzed remote servers the Runner is tired of checking. You install/advance Oaktown Renovation in the scoring remote. They prep for their first click, then run on it. Take the tag-on-encounter of Data Raven, and they take the tag from the Argus ID ability upon stealing your agenda since they figure they can use their last two clicks to clear tags. Except, you rez ZEALOUS JUDGE in the paid ability window before their last click. This guy might be more reliable than SEA Source at landing a 'sticky' tag in the right deck. — umbralAeronaut 7 Jul 2016
Not that NBN doesn't have a lot of other tools for this, but imported, this pairs viciously well with Breaking News, as well as a ton of other NBN things. — Navelgazer 8 Jul 2016