Shuffle 3 cards from Archives into R&D. Remove Preemptive Action from the game instead of trashing it. 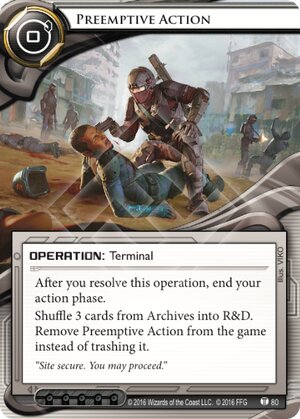 At the time of this writing, you'll notice there's a loooooot of corp cards coming out that essentially do what Jackson Howard does, but weaker. The reason being of course that our beloved Toy Boy, the Howard himself, will soon be gone, and corps need a way to survive without his infuriating strong (and painfully necessary) effect. This is one of those cards.

It does the job well enough. Find a way to overdraw, or trash agendas from HQ, and then this turn or the next play Preemptive Action, making them safe again. It may not have the ability to bait that an asset like Jackson may have, but this card can't be trashed (at least, not easily) and doesn't cost any influence either, so its got that going for it.

Which isn't to say it doesn't have its negatives. Remember how I said "this turn or the next" up there? Well, if you've really got no way to get the flood out of your hand besides overdrawing, then you have no choice--You have to let those agendas sit in archives for an entire runner's turn, a dangerous prospect. It gets even more dangerous if the runner runs on HQ after you do so and sees this card in your hand. They'll know exactly what to do next. Finally, if you do want to use it the same turn you trash those agendas, you not only need at least one more card to make the combo work, but that's gonna be most of your turn to boot. Not an attractive prospect.

Still, what can you do? I'll tell you what you can do. You can stick three of these and three Jacksons in your deck while he's still legal and have recursion strength that up until now was reserved for those scumbags, the runners. So slot these cards and a crapton of operations in your deck and GO WILD WHILE YOU CAN FOLKS.

(Intervention era)
Gerrark 171
This is a little like an operation version of Museum of History. OH GOD NO NOT THIS AGAIN! — PureFlight 7 Nov 2016