I have no idea what I'm doing with reg Val 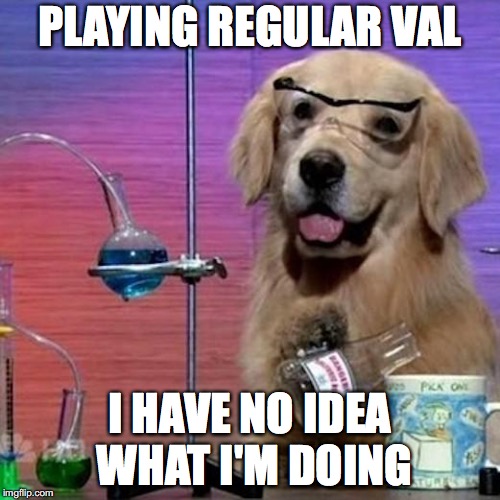 I took this extremely fun list by mo0man and changed two cards. But I wanted to write about my regionals journey (yes, yes) and they didn't get a chance to write up much about the deck so I thought I would. But, to be very clear, they deserve all credit for this deck. I just played with it.

I’m not a great player, but I had the chance to go to quite a few regionals this year and I wanted to try to do as well as I could. Whilst my corp deck clicked into place quickly, I had a lot of trouble with the runner as I’ve never been particularly competent at playing Val and she seemed to be clearly the best deck available. I took a principled stand in Manchester and played Zer0 Val with no Clan Vengeance. It went 1-4. Preston was the next day and I made a quick switch to a CV MaxX. It went 2-3.

At Derby regional R&R was legal and I built a Patchwork Val (again with no CV). It felt good, and I was looking forward to naming it Val-ue Town, but it went 1-4. I was frustrated! Skorp corp was pulling in the results for me so I went 5-5 at each of these regionals. If I could only find a runner to play!

With Stockport regional on the way I spotted mo0man's list and thought I’d take it for a spin. I’d been playing a bit of cerberus' apoc 419 list and was finding apocalypse pretty good against the corps who were trying to build towers of Surveyors for an unaffordable remote. My Jnet results with apocalypse Val were mixed but I decided to go with it. I wasn’t particularly sold on the 1x Mining Accident, nor on the real need for 2x Shadow Net (I wasn’t seeing Sports or Skorp as that much of a thing at regionals). So I dropped the accident and went down to 1 Shadow Net, making room for 2x Eater.

At Stockport the deck went 2-0 in the Swiss then lost an incredibly close game (down to the last card of R&D) against Nemo’s Argus in the cut. At Sheffield the deck was 3-0 in Swiss and I lost two games as corp in the cut. At Aldershot it was 4-1 in Swiss and 1-1 in the cut. So that's 10-3 overall. Somewhat better than what I'd been achieving with regular Val!

Again, not my list, but here are some interesting things that I noticed. I should also say that I feel like I'm only playing this list at about 60% of its potential. Particularly at Aldershot, I felt I was making quite a few mistakes when choosing lines. There's definitely room for me to improve!

I think I'm going to keep playing this style of deck! Obviously the new MWL is going to make CV/Zer0 a thing of the past but I think that's ok. There are options...