[A note to the reader confused by my irresponsibly spicy picks: Mwanza City Grid is a proxy for Embolus here, as Spiderweb is for Border Control.]

Why is this deck called H. gammarus modernism? Because at this point I think it's impossible to make a Weyland deck on NRDB without a reference to lobsters, and since this deck has 3x of @nemamiah's excellent Border Control, I figured it should be Homarus gammarus, the European lobster. 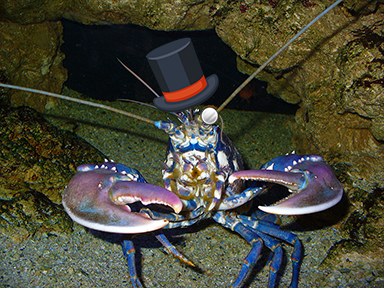 A few weeks leading up to King of Servers, my team (myself, @ajar, @miek, and @creditzathotmail) was solidly of the opinion that Weyland was garbage. Our attempt to make Gagarin prison work died with Museum and Clone Suffrage Movement, as did the surprisingly-effective-for-a-complete-meme SPF49. Argus and tempo Gagarin seemed irresponsibly weak to Turntable, which we expected everywhere (as we ourselves were splashing it in both crim and shaper and naturally slotting it in Val). MWL 2.2 took away much of The Outfit's power: without Surveyor, it was very challenging to build a remote server taxing enough to keep out shapers who could clot your Audacity win, and it was all but impossible to make centrals strong enough to withstand Indexing after giving an anarch 4-5 bad pub. Without GFI, we found ourselves losing to random central pokes far too often.

[As a side note, we were completely wrong about Argus. Props to @aunthemod for figuring it out and blasting swiss with it.]

Then @spags dropped THE OMEGA SCOOPS of both the champs cards and the fact that they would be legal for KoS. I took the GFI Outfit list, dropped the three worst ice for Border Controls, and never looked back.

This deck plays much like the classic Lobster Outfit decks, so I won't belabor the point, just highlight a few differences.

1) Yeah, you end up with a lot of bad pub, but Border Control raking the runner through Archer multiple times makes servers pretty damn taxing anyway, even against D4. This plus your ability to rebound from low money with Too Big To Fail and your ability to tutor 1-ofs with Consulting Visit was the rationale behind SEA + Exchange, and it got me there surprisingly often. You lose a Hard-Hitting and a Snare! for it, both of which are good cards for you too, so this comes down to personal taste in many ways.

2) Once I was down to 1x Snare! and found people tended to respect it out of Outfit anyway, I decided to cut down to 0. The replacement I went with was Embolus. The rationale for this was making Shapers or Anarchs with a light econ draw run before they were in a position to do so economically or risk letting an Embolus tick up somewhere they'd want to run later. I had mixed results between testing and KoS, and I'm not 100% convinced it's correct in a deck this ice-light because all you do is put the runner on a "run somewhere for 0 credits within 2 turns" clock. As those of you who've gotten good draws with The Outfit know, though, sometimes that's all you really need--one turn of clearing a Liberated that you can't punish is sometimes the difference between a win and a loss. Fast Track does something similar, but dammit I want to play with the newest spice. If you somehow get 2 counters on a server that matters, though, your Nisei effects with Border Control make it actually kind of impossible to get into that server.

This deck went 3-2 at KoS, beating Liza, Patchwork MaxX, and Paragon Smoek, then losing a close one to Pawnshop Hayley (in which I successfully taxed out 3x Fan Sites thanks to Archer and Border Control but got topdecked for the win before I could capitalize) and a very close one to @simonmoon on Turntable MaxX because his influence with the Lobster deities far surpasses my own.

In summary: is the best deck with Border Control? Absolutely not, you probably want to turn to the Jinteki faction for that. But is it fun? Absolutely yes. Pressing the 8 meat damage button will never not be fun.