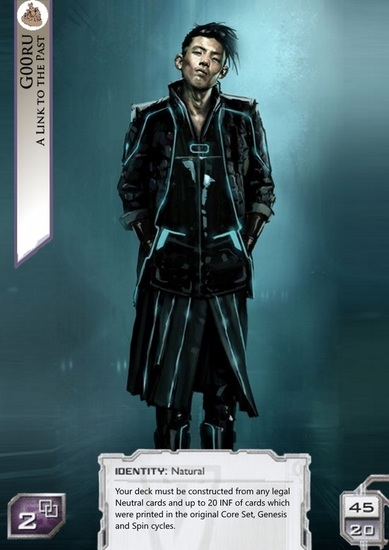 Edit: I uploaded an old version of the deck >.<, the day of he event I swapped out Injection Attacks for Dean Lister.

Here it is, prepaid G00ru in all it's glory.

The deck has problems in feeling very vanillia and lacking any sort of threat burst.

Also the OG breakers have aged very badly, corroder feels bad compared to clip, mimic/sucker isn't as oppressive as it once felt and Zu is so expensive to get through most things these days (I considered Yog, but codegates have evolved, DNA and F3 laugh at the once meta ruining key)

Still it was fun to play with parasite again. That said the games it lost were close, getting to 6 before getting fast advanced out, and failing to find the last point in a big wheel dig.

The ID was a very interesting deck building challenge, and I think prepaid maybe wasn't the right way for him to go.

That said the games were so fun, and thank you to Richard for making the ID and to echo for making me bid over £150 to play him.

See you all next year.