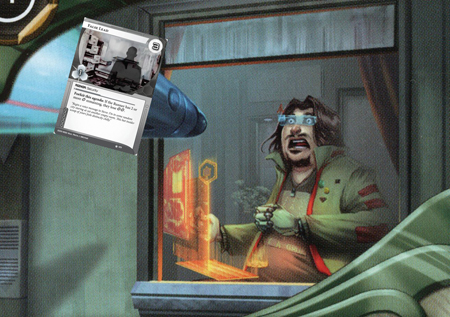 This is the Corp_Deck i took to the Europe-Africa-Continential Championship. In fact it's nearly the same I already played at King of Servers at the german nationals in January and at my first and only SC this year, I only changed it very little.

About the Deck itself: i am thinking about a few minor changes here and there, but overall it performed as good as I thought it will and I'm very happy with it. I was honestly surprised to see no False Leads in the other Argus-Decks in the Top-Cut as I definately think it is the MVP of the deck by far. False Lead gives you so many possible outs and puts so much pressure on the runner, sometimes making them trip and do a mistake for the kill, sometimes simply presenting them loose-loose-situations.

Overall I was very confident about this deck, and it worked out quite well in the torunament going 6:2, only loosing twice to Geist, which is arguably it's worst matchup by far, because of the high amounts of card-draw and money Geist produces out of thin air whenever they need it.

First round was against Maëlig playing Leela: I was very low on money most of the game but then able to kill him with False Lead into HPT after he scored an agenda on RND taking two tags on the ICE before.

Second round against Late, a fellow player from my region who played Hoshiko (there should be a german video of this game on late's youtube-channel "oktomat"): I locked off all of my servers with code-gates while he was desperately drawing for his Black Orchestra and I was able to comfortably score before he found it, winning with a Hostile Takeover off of an Atlas-token in the end.

Third round was against PuMeGo playing the only Apex of the torunament. That game was streamed at the NISEI-Twitch-Stream, so you may watch it on the VOD. She opened by putting heartbeat on the table on turn one, making it very hard for me to kill her at all. I counted all the installed cards for the whole game and in the end I managed to first value-Boom! and then HPT her a few turns later.

Forth round was played against MrBuggles on Geist and the first loss of the deck that day: All in all I was just too poor to land tags and lost to only a few good stargate-runs very quickly.

Fifth round against rusefus, who played 419: I scored both Hostiles early and lost two GFI early, while he went full-on Aumakua. I then managed to get up my Hortum with 3 advancments on RND locking him out and he made the mistake to run into it, giving me not only the end-the-run but even two card-tutors - I really had no clue Hortum could do that until this moment, I was just thinking of the ETR against his AI :D After that I managed to tag him with HHN into False-Lead for the kill right before time with the tutored HPT.

Sixth round I played against ChaosIsMe with a good-stuff-Freedom-Deck. I scored some Atlas with tokens and some Hostile and False-Lead and in the end killed them with an Atlas-Boom! after taking away their clicks with false lead when they went in through three DataRavens to access something.

I didn't play the last round with this deck, because my runner won my a 241 there. After that I made it into the Top-Cut by being 17. after swiss and getting lucky, someone had to drop out.

First Game of the Top-Cut was against Mortivor playing Kabonesa Wu and this game was streamed by NISEI as well, so go luck up for it on the VOD: I had a very fast nice start with scoring a Hostile and two false Leads in just a few turns before he was set-up at all. Had a few good opportunities to HHN-tag him with enough money, but just no single kill-card or Consulting Visit came my way -.- The game got way closer than I liked it when he started to outmoney me and invalidate HHN completely, but in the end I was able to False-Lead-HPT him after he stole an Agenda from RND with Khusyuk through a Data-Raven.

Second Top-Cut game with this deck was my forth and last round in the Top-Cut against Ohm (who might or might not have been Asger in disguise ;) ) with Geist. I managed to score two False Leads again, but made the big mistake to put down both DataRavens on my Remote instead of placing one in front of RND, so even with an rezzed Archer i wasn't able to stop the Stargate-pressure enough without the Raven-tax-tag. When he started to Stargate he was on ~45 credits, in the end he was taxed down to ~8, but I wasn't able to tag and close out the game. I think the End of that game was on the stream as well, if someone want to check it out.

All in all i had a blast playing in this tournament and making it into a little "Netrunner-Party" with some friends playing and watching the stream at my place. I thank every one from NISEI who are keeping this awesome game alive and all my opponents for the fun games.